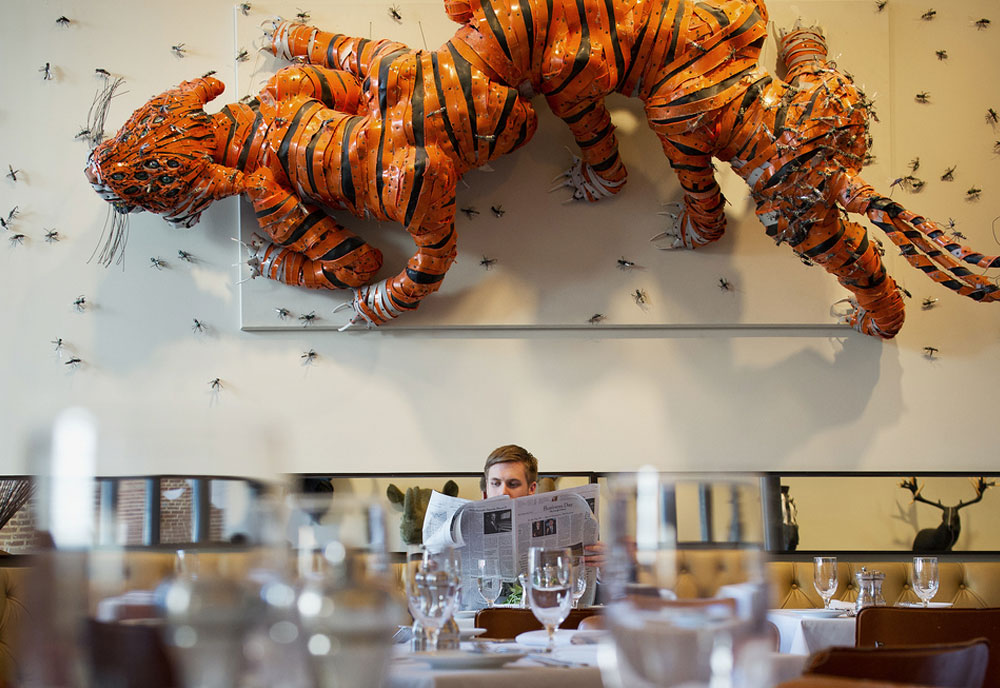 PRESS RELEASE – 21c Museum Hotels, the award-winning boutique hotel, contemporary art museum and restaurant group, is proud to announce the appointment of Michael Paley and Levon Wallace as executive chefs of its restaurants in Cincinnati and Louisville, respectively.

Michael Paley, the executive chef at Proof on Main since the property opened in 2006, will remain the chef/partner of Garage Bar, a Neapolitan-style pizzeria, country ham and oyster bar in Louisville’s NuLu neighborhood.  Paley will relocate this fall to lead the kitchen at Metropole, the new restaurant in the 21c Museum Hotel in Cincinnati, which is scheduled to open in fourth quarter 2012.  Under Paley’s direction, Metropole will emphasize the city’s old world roots and focus on dishes cooked in a custom-built hearth.  Showcasing the region’s sustainable farmers and producers, Paley will develop a menu of string-roasted meats, ash-cooked vegetables, house-made charcuterie and more, with a beverage menu that favors craft beers and bourbon.

“After opening Garage Bar, our wood-fired pizzeria in Louisville last year, I was inspired to create a menu that is cooked almost entirely by wood-fired heat,” Paley says.  “Our menu at Metropole will reflect Cincinnati’s rich, European-based culinary heritage, and I am thrilled to introduce our custom-built hearth as the focal point of the restaurant and the menu.”

21c Museum Hotel Cincinnati will renovate the former Metropole Hotel—a historic landmark in downtown Cincinnati—restoring this nearly 100-year-old architectural gem into a beautiful public space.  21c is embracing the architecture of the Metropole building to create a new space for visitors and residents of Cincinnati to view cutting-edge contemporary art, and enjoy Paley’s menu that celebrates the region’s sustainable producers and culinary traditions.  A rooftop bar will offer stunning views of downtown Cincinnati and the surrounding area.

Levon Wallace, an alumnus of luxury resort properties Ojai Valley Inn, Harbor View Hotel & Resort and The Kelley House in Nantucket, has been appointed as executive chef of Proof on Main, the acclaimed restaurant located at 21c Museum Hotel in Louisville.  Over the course of the summer, Wallace and Paley will work in tandem on transitioning the kitchen.

“Over the next few months, Michael and I will work side-by-side to ensure a smooth and seamless experience for our guests and staff,” says Wallace.  “I am excited to become part of the vibrant dining community in Louisville, and look forward to introducing my new menu at Proof on Main this fall.”

Signature Proof on Main dishes, including Bison Burger, Warm Ricotta, Charred Octopus, and House-Cured Meats, for example, will remain on the menu.  Wallace will gradually introduce new menu items, showcasing responsibly sourced and locally raised ingredients from the restaurant’s Woodland Farm and other regional purveyors, with his approach of soulful, honest cooking to reflect Proof on Main’s style.

About 21c Museum Hotels
Founded in 2007, 21c Museum Hotels is a growing company that oversees the expansion and management of 21c properties nationally. The flagship hotel was founded in Louisville, Kentucky in 2006 by Laura Lee Brown and Steve Wilson, contemporary art collectors, who had a vision for bringing art into people’s daily lives and supporting the revitalization of their hometown. The property combines a 90-room boutique hotel, contemporary art museum, award-winning restaurant, and cultural civic center in the heart of downtown Louisville. With 9,000 square feet of art-filled meeting and event space, 21c guests enjoy authentic Southern hospitality while exploring the work of contemporary artists in North America’s first museum dedicated solely to art of the 21st Century. 21c has garnered praise from notable publications including Travel + Leisure, The New York Times, Wall Street Journal, National Geographic Traveler, and W. Voted among the top 10 hotels in the world in 2009, 2010 and 2011 in the Condé Nast Traveler annual Readers’ Choice Awards, 21c Museum Hotel is redefining the art of hospitality. Due to the success of the Louisville property and with strong local partners who share the belief that art can be an economic driver for a community, 21c is expanding outside of Louisville. Hotels are under construction in Bentonville, AR and Cincinnati, OH and a project has been announced in Lexington, KY. The company plans to develop 15 properties over the next five to ten years.

About Proof on Main
Located in downtown Louisville, Kentucky’s 21c Museum Hotel, Proof on Main’s menu is inspired by the culinary traditions of the American South. Through partnerships with Woodland Farm and other regional farmers and producers, the menu has become a showcase for the bounty of the Ohio River Valley. Woodland Farm, located 24 miles east of the restaurant, is owned by 21c founders Laura Lee Brown and Steve Wilson. Preserving the farmland of Kentucky and bringing heritage foods back to the table are among the couple’s greatest passions. Brown and Wilson collaborate to provide Proof with sustainably grown produce and heirloom fruits. In 2010, they began raising heritage breed chickens to supply the restaurant with eggs as well as Hereford and Mulefoot hogs. The farm is also home to the couple’s sustainable bison operation, Kentucky Bison Company, which supplies Proof and numerous other restaurants around Louisville with hormone-free, grass-fed bison. As an official part of Louisville’s Urban Bourbon Trail, the restaurant and bar stocks over 50 of Kentucky’s finest bourbons. For more information visit proofonmain.com.