For this week’s Artist Check-in, Christian Becerra, whose work is on view at 21c Chicago as part of the exhibition, This We Believe, responded to a request for an “Artist Check-in” with this amazing video!  You can watch the full video with subtitles on the 21c YouTube Channel: HERE.

Below, you will find a transcription/translation of the audio for ease of reading.

Documents embody symbolic values, attribute an aura to an object, a humanized identity, and, in many cases, directly imply an exercise of power. There are documents with precisely that function in our societies: the administration of power through the symbol. 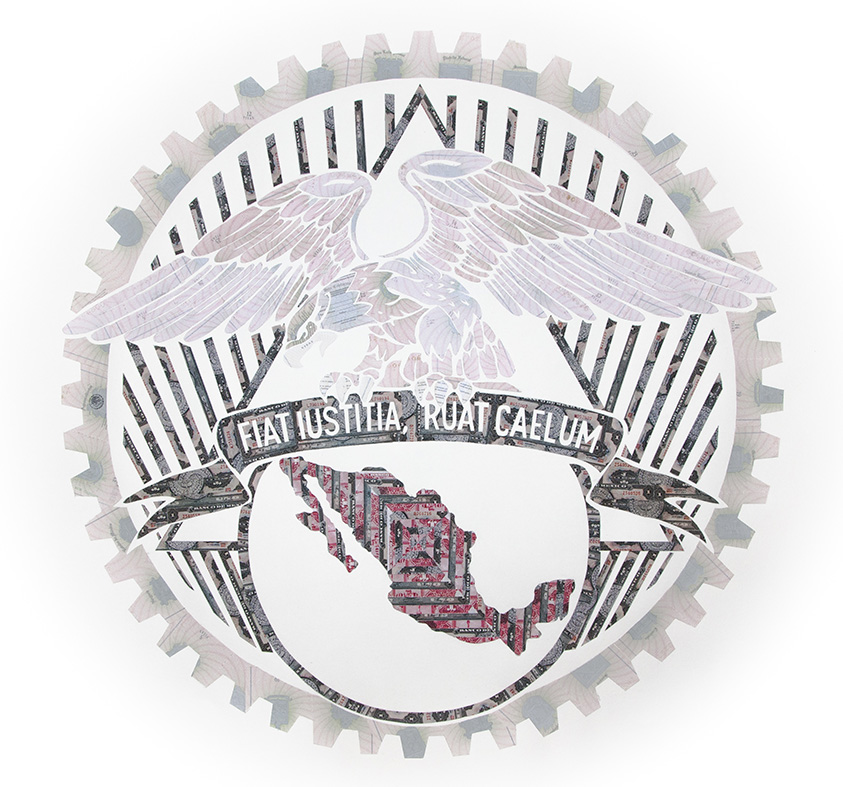 That Justice Be Done Even if the Sky Collapses, 2017

In 2017, I had a solo exhibition in Mexico City entitled That Justice to Be Done, Even if the Sky Collapses.

In this exhibition I reflected on the geopolitical territories, migratory life, and all the calamities the human being who migrates faces.

I proposed an examination of a vision that must be questioned, but also of the aesthetics of the passport and national identity documents, metaphors for both passage and confinement of citizens, a fictitious representation of what makes belonging to a society possible or simulates it: being accepted as investors, tourists, or simply as merchandise.

I utilized collage, carefully cutting and reassigning meaning to hundreds of official documents, such as paper money and passports, using various graphic and emblematic elements as references, such as those of the Special Forces of the Mexican Army, the shields of the Federal Police, and other symbolic elements of historical and ideological character, contrasting them with testimonies or kidnapped migrants from southern Mexico.

I am very grateful that this piece is part of the collection and that it is showing in 21c Museum Hotel Chicago’s exhibition, This We Believe, which explores the power and evolution of religious, political and economic systems, and the rejection of the ideologies that have influenced our current culture of global division and polarization.

Between the years 2018 and 2019, social media users shared photos and videos showing streets of various Venezuelan cities full of paper money. The situation there had reached the point where the paper on which the Bolivars (Venezuelan currency) were printed, was more valuable than its own face value. So, the banks chose to throw the Bolivars in the trash instead of allowing further devaluation of that currency.

Since Mesopotamian seals, the production of images has been linked to art and the economy, and, along with it, the desire of the dominant groups to capture their worldview in documents. Coins and banknotes are an example of the union between image, economy, and politics.

During the pandemic, I could not work with original material. I acquired Bolivars in very good condition and I took photographs of them one by one and began to work digitally to reconstruct them and transform them into a pure element of visual language. 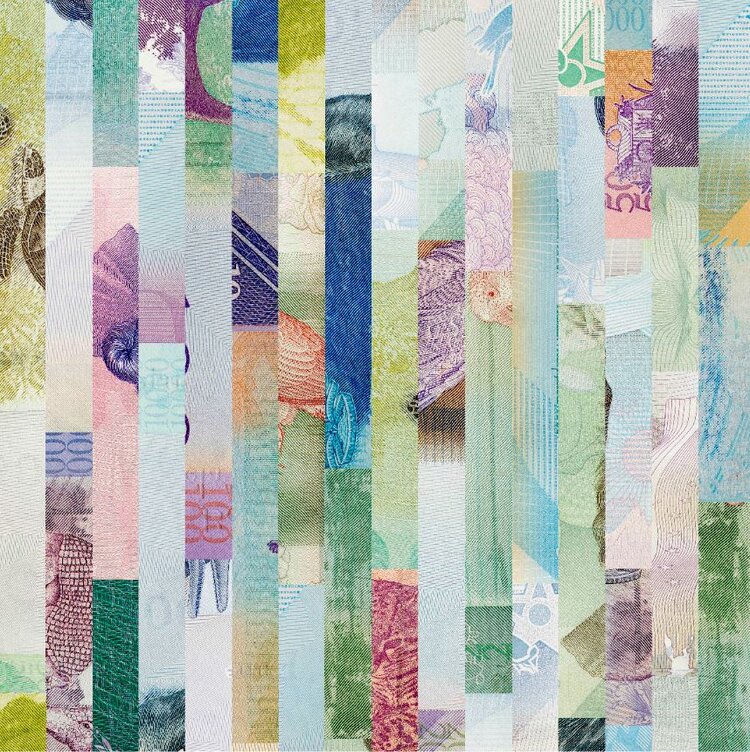 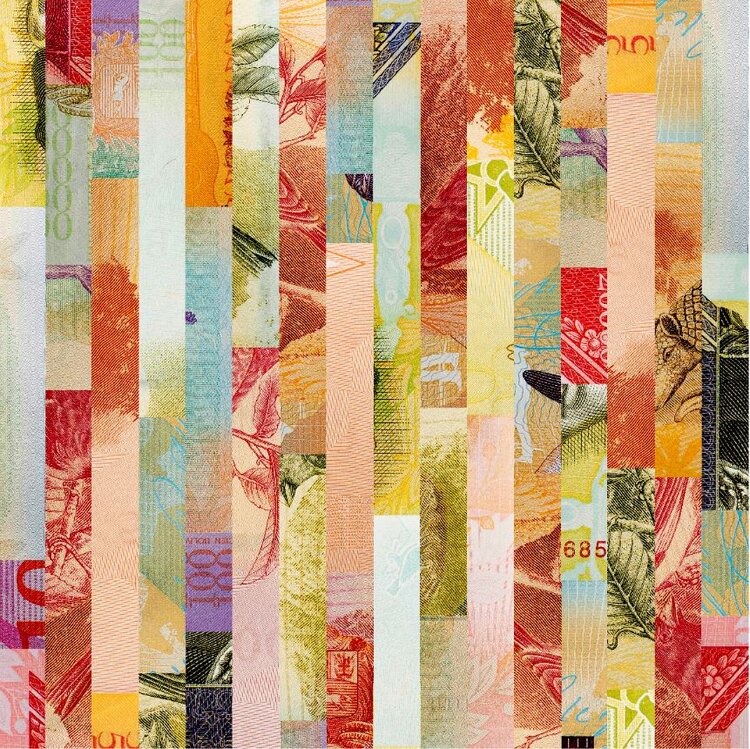 This digital collage is printed on cotton paper and was made from the Bolivars’ own designs, which show details of the fauna of Venezuela. The series aims to cancel the meanings that built the identity of those banknotes and their particular historical and political context.

“Who believed to own his eyes because he was looking at the landscape?” is a quote from the Venezuelan poet and essayist Eugenio Montejo, who reminds us with language close to nature, that nothing belongs to us.

A few months ago, this virus forced us to look at inequality and the impact of the quality of healthcare we have access to, the option of working from home, and the possibilities that a home can offer as a safe space.

Let’s think about the structural problems that have been normalized until a few months ago. Let’s think about the fragility of the economy, and the radical difference between the real economy and the reverence to the world stock markets, the preference of certain sectors for a more functional economy, even if this means condemning others to disease, the utilitarianism and the cult of progress carried to its last consequences.

I believe that there are wildly individualistic philosophies in which systemic failures are invisible and the burden falls squarely on individual responsibility.

Large projects were cancelled all over the world, but while the consequences are significant for institutions, smaller organizations and independent artists were most affected.

Many probably did other types of more lucrative work.

We must consider the instability of our cultural and artistic institutions.

I think we will need time and stability.

I am currently going through a long, more reflective and experimental process. I try not to demand immediate answers.

I believe that the main value of art is the ability to humanize ourselves and art cannot necessarily change behaviors: that requires work.

For me, art is an antidote in these times of chaos, in these times of uncertainty, it repairs, it is a tool that many not act immediately if it does not require experimentation, constant analysis, and the deconstruction of stereotypes and thought processes.

Art has other obligations.