How do you situate your work in the context of the current moment?

Much of my practice deals with the perceived lack of humanity around Black bodies within a violent system. The murders of George Floyd, Ahmaud Arbery, Breonna Taylor, and Tony McDade are the latest high–profile examples of that laid bare. White supremacy infects every aspect of American society. It is many things, loud, and quiet, in plain sight and invisible. But ultimately it is deadly. It murders Black people whether under the knee of a cop, through the ink signing legislation, over years of stress that finally attacks the heart or in the cowardice of white people’s discomfort. It must be dismantled. It must be dismantled by white people and white-led institutions. This will be measured not by the few Black folks who will manage to make it into elite circles but by those who are often forgotten, poor and working–class Black people, Black women, Queer and Trans black people. It’s tough work but it is worth our humanity.

What projects are you currently working on and how is social distancing affecting your art practice?

I’m taking this time to work on a few different projects such as a series of drawings around “essential workers” and afropessimism theory. I am also working on a transmedia historical fiction about the Wilmington massacre of 1898 that I will turn into Black Digital Folklore.

Social distancing has allowed me more time at home and more time to research and reflect. To be honest, that in itself is a privilege because as an educator, I currently have stable income and insurance. Unfortunately, that is something many fellow artists, the working poor and too Black and brown people aren’t afforded.

What advice and tips can you give to other artists during this time?

Don’t feel guilty for not creating your “masterwork” because we are in quarantine. Rest and play can be productive (it’s OK to binge Netflix). You don’t need to be producing 24/7. Activities that don’t directly lead to art creation can also be productive. Allow yourself time to think, reflect and build community. Giving yourself this time can lead to better art making experiences. Your mental, physical and emotional health is what is most important.

Many artists are losing income during the quarantine so don’t be afraid to ask for help.

How are you cultivating community for yourself and what can the community be doing to support artists?

I share any resources that I can with artists in my network. Providing financial support is great, – with that there should also be consideration at how COVID is specifically affecting more vulnerable artists communities POC, queer, immigrant.

More about the artist:

Antoine Williams’ mixed-media work investigates his cultural identity by exploring power, fear and the perception of signs within society. Heavily influenced by science fiction, and his rural, working-class upbringing in Red Springs, North Carolina, Antoine has created his own mythology about the complexities of contemporary Black life. An artist-educator, Antoine received his BFA from the University of North Carolina, Charlotte, and his MFA from UNC Chapel Hill. He helped start the God City Art Collective in Charlotte, where he participated in a number of socially engaged, community-based art projects, such as pop-up art shows, afterschool art programs, underground rap shows, and film festivals. He has exhibited in a number of places, including at the Mint Museum of Art, Michigan State University, Columbia Museum of Art, Smack Mellon, Brooklyn, 21c Museum, as well as many other venues. He is also a recipient of the 2017 Joan Mitchell Award of Painters and Sculptors. Williams is an assistant professor of art at Guilford College. 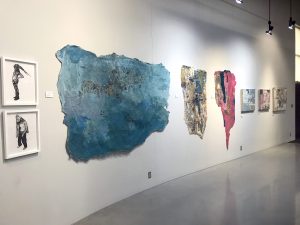 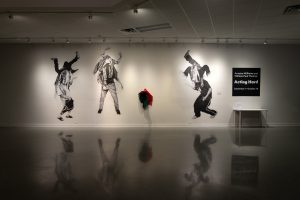 Study of a Hotep Holding on to the Myth of Power

wheat-paste and pan-africana flag on sheet-rock 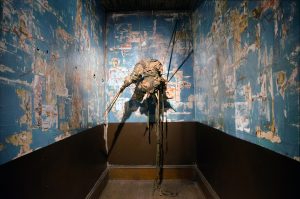 Because They Believe in Unicorns