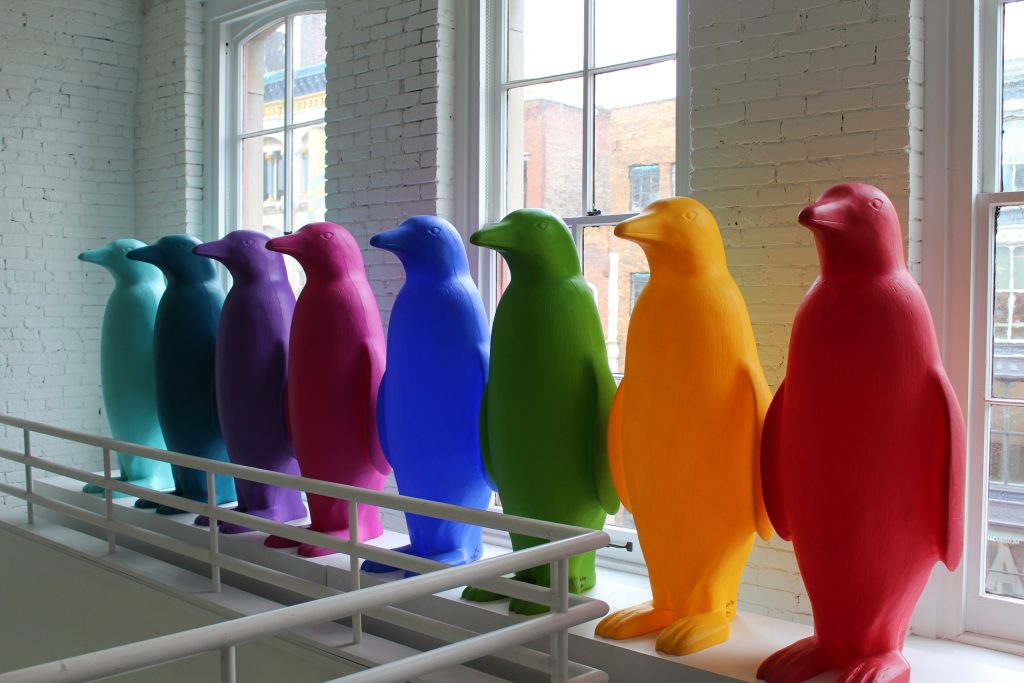 It’s hard to imagine walking into a 21c without encountering one of our now-synonymous Penguins, but they were never intended to remain on permanent exhibition. Cracking Art’s Red Penguin sculptures were first exhibited at 21c Louisville in 2006. 21c founders Laura Lee Brown and Steve Wilson purchased the sculptures after seeing them perched around the city at the 2005 Venice Biennale as part of a public art project.

“The public really chose the penguins,” says Wilson. “They were part of our opening exhibition in Louisville and people couldn’t help but interact with them. They would move them around, take photos with them, take them to dinner and to their rooms. They have really become an icon, and emblematic of our mission to make thought-provoking contemporary art more accessible to the public.”

13 years and 8 hotels later, each 21c has its own flock of Penguins — each in a color that embodies the singular identity of their city. The Penguins greet visitors throughout the hotel – in the lobby, elevators, restaurant, guest rooms, and often, where you least expect them. Cracking Art’s mission is to raise awareness of environmental issues and the use and misuse of natural resources by creating artworks using materials derived from petroleum products. The name Cracking Art refers to the chemical reaction that occurs when converting raw crude oil into plastic or the moment when natural becomes artificial. The group was founded in 1993 by seven artists: Alex Angi, Kicco, Renzo Nucara, Carlo Rizzeti, Omar Ronda, Marco Veronese, and William Sweetlove. Cracking Art has created more than 600 exhibitions worldwide.