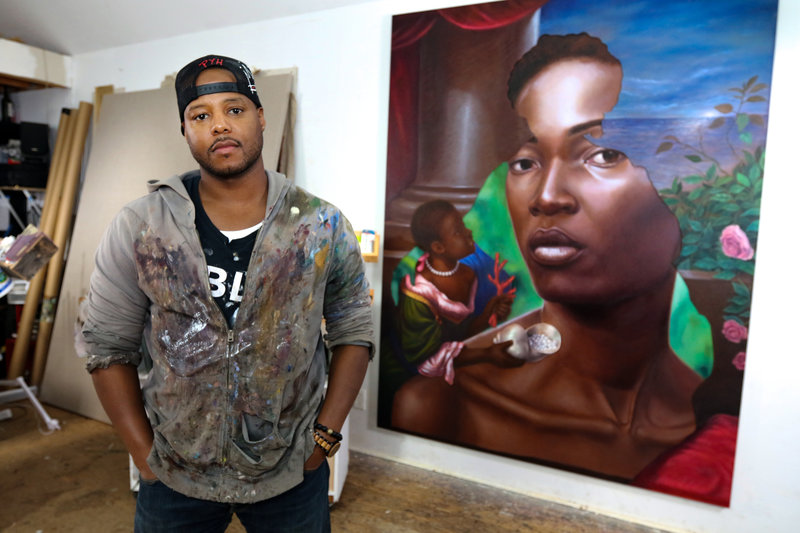 The 2018 MacArthur Fellows were announced yesterday, October 4th. Each of the 25 recipients will receive $625,000 of unrestricted funds over the course of five years. Congratulations to artist Titus Kaphar for being included in this year’s class.

The MacArthur fellowship, commonly referred to as the MacArthur “Genius” Grant, is awarded each year to United States residents working in any field who display “extraordinary originality and dedication in their creative pursuits and a marked capacity for self-direction.” The award considered an “investment in a person’s originality, insight, and potential,” does not accept applications, but rather anonymous nominations which are reviewed by a confidential selection committee. 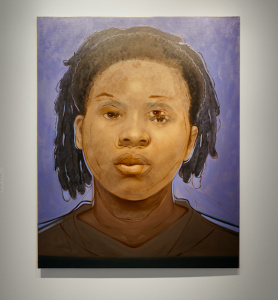 Titus Kaphar was born in 1976 in Kalamazoo, Michigan. He received an MFA from the Yale School of Art and is a distinguished recipient of numerous prizes and awards including the 2018 Rappaport Prize, a 2016 Robert R. Rauschenberg Artist as Activist grant, a 2015 Creative Capital grant and the 2014 Gwendolyn Knight and Jacob Lawrence Fellowship, among others. He lives and works in New Haven, Connecticut.

Kaphar is a painter and sculptor whose practice examines the history of representation. In his art, he appropriates styles and conventions from the art historical canon and, using techniques like cutting, shredding, and erasing, he represents them to illuminate social inequalities and address African-American experiences from our country’s founding to today. Ultimately, his work confronts our past to highlight the inadequacies of our present. In Kaphar’s words, he creates works “that nod to hidden narratives and begin to reveal unspoken truths about the nature of history.” 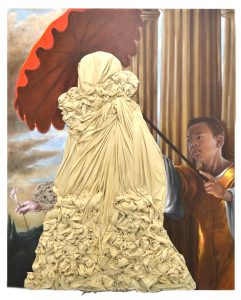 In late 2014, TIME magazine commissioned Kaphar to create an artwork in response to protests in Ferguson, Missouri. Kaphar’s work has been included in solo and group exhibitions at Seattle Art Museum, Seattle, WA; the Studio Museum in Harlem, New York, NY; Savannah College of Art and Design, Savannah, GA. MoMA PS1, Long Island City, NY and the National Portrait Gallery, Washington, DC.  His work is included in the collections of The Museum of Modern Art, New York, NY; Pérez Art Museum, Miami, FL; Brooklyn Museum, Brooklyn, NY; the Studio Museum in Harlem, New York, NY; and Seattle Art Museum, Seattle, WA, amongst others. In 2017 Kaphar led a TED Talk titled “How Can We Address Centuries of Racism In Art?” in which he explored the history of racism in Western artwork—and asked how we can amend it through contemporary art. 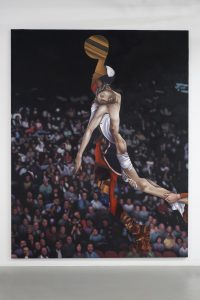 Kaphar is also invested in his own community in New Haven, Connecticut. In 2015, together with Jonathan Brand, he set up NXTHVN, an ambitious art space housed in a former manufacturing plant in the Dixwell neighborhood of New Haven. Here, artists and curators work together to make art, exchange ideas, and extend their networks. The center is also involved with a number of local high schools.

Kaphar’s work is currently on view as part of Dress Up Speak Up at 21c Louisville, Portraying Power and Identity: A Global Perspective at 21c Durham, and Pop Stars! Popular Culture and Contemporary Art at 21c Oklahoma City.

Most recently, Kaphar designed a billboard, “Behind the Myth of Benevolence”, as part of For Freedoms 50 State Initiative that was installed in Louisville on I-65 North. His statement about this work: “‘Behind the Myth of Benevolence’ attempts to give presence to the hundreds of thousands of untold and hidden narratives about usurped liberty – made famously apparent through the story of Jefferson’s enslaved woman Sally Mae Hemmings, who was the mother of his children. Extensive documentation of this relationship tells us that Sally Mae was very light skinned. I chose to make her skin darker in this work to evoke the countless women whose liberty was taken from them at the hands of powerful men. This work attempts to give presence and voice to these erased histories.” This public artwork will be on view through October 29th.

Behind the Myth of Benevolence, Titus Kaphar