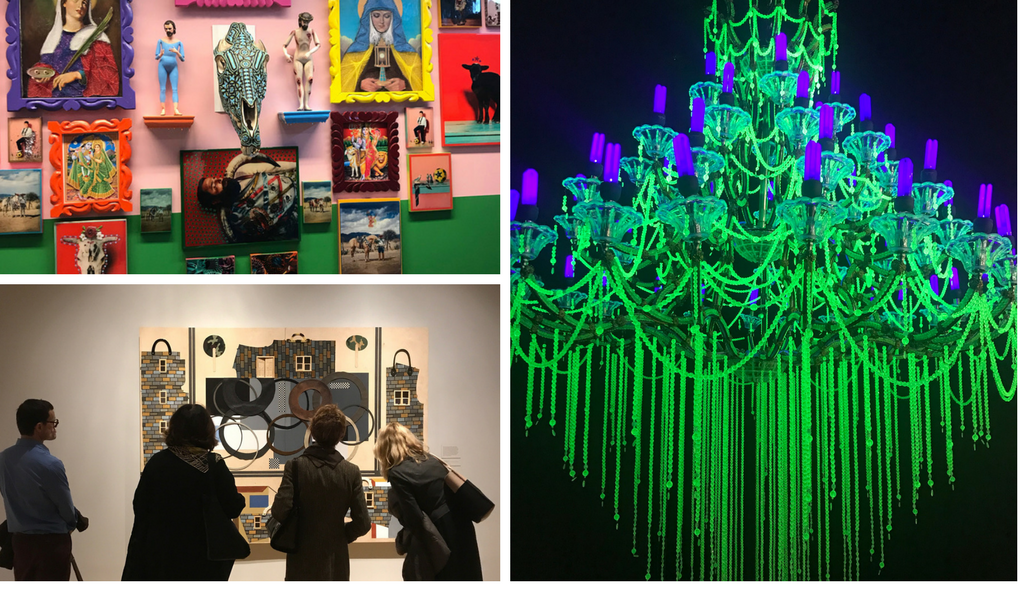 Last week, the 21c museum team ventured to New York City for what is now called Armory week, during which they attended art fairs, visited artists’ studios, and explored current exhibitions. We sat down with our Chief Curator Alice Gray Stites to hear more about what they did and the works they saw.

Q: What was different about Armory this year?

A: We were immediately struck by one of the initiatives that Armory Show director Nicole Berry has pushed forward: commissioning artists to do special large-scale projects within the fair. Walking in, we were greeted by these colorful, larger-than-life-size hanging dresses by Jeffery Gibson. These works were inspired by the costumes worn in a Native American ghost dance. There was also a large architectural installation by Tara Donovan that was quite striking. She’s known for using everyday materials and this work was no exception, it was made completely out of plastic tubing.

21c artist Wilmer Wilson IV did a large-scale ongoing performance that was commissioned by Armory. We were excited to discover that Wilmer has another presence in New York right now. His artworks are featured in the New Museum’s triennial, Songs for Sabotage. It’s such an honor to be included in this. The triennial showcases the work of young artists, focusing on what’s new and what’s next. We’re especially thrilled to see Wilmer’s work there because three of his photographs are featured in Louisville’s upcoming exhibition, Dress Up, Speak Up.

Q: Did you see any themes throughout the shows and exhibitions you visited?

A: Armory continues to be a strong and varied show with the presence of galleries from all over the world. Not just at Armory but everywhere we visited, we saw works that address our current sociopolitical climate. We also saw a lot of works promoting equality—whether that be for women, people of color, or the LGBTQI community.

Q: What acquisitions are you really excited about?

A: This year, we acquired works by artists from 5 different countries, including South Africa, France, and Japan. I am really excited about a work we purchased by French artist JR. He’s known worldwide as an artist, photographer, and filmmaker. He did a documentary last year called “Faces and Places” that was nominated for an Academy Award. He’s also won a TED Prize that allowed him to start a project called “Inside Out”—it encourages communities worldwide to take portraits of themselves and then JR and his team create these huge posters that they install throughout the city. He’s had solo shows all over the world, including at the CAC, our neighbors in Cincinnati.

He did a project where he took photographs of women’s eyes and created enormous reproductions that were then put on trains in Kenya. He’s now taken this concept and created miniature replicas of the trains, which is the work we acquired.

I’m not only excited about this work, but also thrilled to welcome JR to 21c. He’s an artist that fits in so beautifully within the 21c collection and with our mission. JR’s truly focused on bringing art to the public and using art to highlight social and economic issues. His work gives voice and vision to people who are largely unseen.

Q: Speaking of 21c artists, who did you have a chance to catch up with?

A: We were lucky to see works by many of them while we were in town, and visit with several. We saw Mohau Modisakeng’s powerful new work about how Central Park came to be, and new works by Valérie Belin and Sebastian Bremer. We visited Fahamu Pecou’s new show “MEMORY” at Lyons Wier Gallery. Our friend Helen Toomer curated an installation at the fantastic “Spring/Break” fair, where we saw Brian Paumier’s work, along with a lot of interesting VR and interactive art. We also visited Hank Willis Thomas’s studio.

Derrick Adams has a solo show right now at the Museum of Art and Design called “Sanctuary” and it’s really fantastic. This body of work was inspired by The Negro Motorist Green Book, an annual guidebook for black American roadtrippers that was published from 1936-1967. There is a series of houses made from milk boxes and he actually built a road in the gallery. The cars that you see on the road are made from driving caps because one of the directives The Green Book gave was on how to dress properly—or safely, if you will—while on the road. He also made beautiful collages inspired by the various themes from the book. I’m really proud to have him in our collection.

Q: Tell us a little more about your studio visit with Hank Willis Thomas.

A: Hank Willis Thomas’ studio was so inspiring. We saw a lot of his new artwork, in which he is continuing to use retroreflective screen printing, but adding in some painterly gestures. Introducing that practice into his use of historical photographs of protest brings in a reference to abstract art, which was in its heyday in the 1960s. There is certainly a gulf between who were recognized as the best artists of that time (largely white, male abstract expressionists) and the civil rights movement and Hank alludes to this tension in his new work.

We’re also excited to join Hank and his team in the For Freedoms project, a political super PAC that models how art and discourse can engage communities. He’s hoping to bring this to all 50 states during the midterm elections and all of our locations will be participating.

Q: To wrap up the week, you participated on a panel at NADA with William Nathan of The Current Museum and Jason Foumberg of The Thoma Art Foundation. What were some of your takeaways from this?

A: The panel was on collecting and preserving art that wouldn’t exist without technology, such as film, video, VR and AR. These works are not defined by their technology and just like any other art, their message can be enhanced and amplified by including them in thematic multimedia exhibitions. We have a responsibility to know, understand, present, and support this kind of work because technology is integrated into everything we do and the future is coming fast. The digital world is one that we’re living in more and more. If we don’t want that realm to be defined by technology that is designed to increase the profit for the few and control of the many, then we need to have art in that space. Art is the space of freedom and imagination.