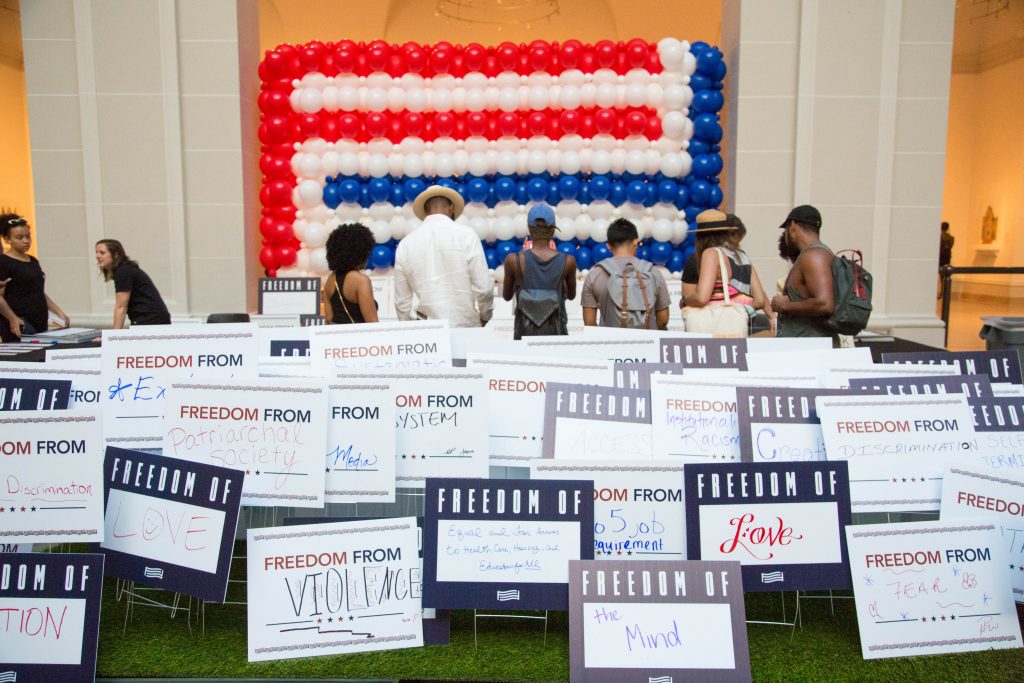 Founded by Hank Willis Thomas and Eric Gottesman, For Freedoms provides a platform for civic engagement, discourse, and direct action for artists in the United States by producing exhibitions, town hall meetings, billboards, and public art. More than 150 artist-designed billboards are being erected in all 50 states leading up to the midterm elections on November 6th. We are proud to be an institutional partner to For Freedoms’ 50 State Initiative and have sponsored billboards in the 10 cities across the United States that we call home today and in the near future.

Artist Statement: “The use of machine embroidery on a vintage dishcloth is symbolic of the intrinsic violence of domesticity and the female experience throughout history. It speaks to the concept that in this climate, inaction and apathy are tantamount to violence and that we all have a responsibility to do what we can to make this a safer and more just country for everyone.” 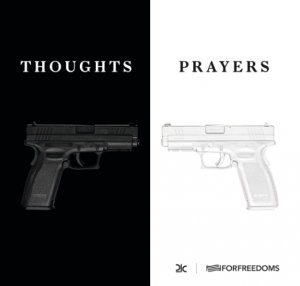 Artist Statement: “The work, entitled Thoughts & Prayers, presents two firearms reflected in conflict under the flattened sentiment of a clichéd phrase. Crown confronts the viewer with a choice of action or indifference thereby urging citizens to ‘translate thoughts and prayers into policy.'”

Artist Statement: “I was fortunate to spend a significant amount of time with my Bachan, great-grandmother. During her lifetime, I was not old enough to think critically about her immigration to the United States. In hindsight, I see she greatly influenced my creative practice, teaching me how to beautifully mix cultures. Alice Walker once said, “…I suffer from racial vertigo that can only be cured by taking what one needs from one’s ancestors.” Her words resonate with me and my need to find out who I am within the collective. During WWII, my family was incarcerated because of their Japanese heritage. President Franklin D. Roosevelt, in an unconstitutional use of power, signed Executive Order 9066 incarcerating all Japanese Americans. In many cases, families were separated. Even those who were able to be imprisoned together suffered a damage of family structure.

Now I see others like my Bachan and her family who are being demonized and separated from their families. Recent accounts of children being taken from parents at the U.S. / Mexico break my heart and inspire me to speak out through art. Using documentation of the WWII incarceration to compare today and the past, I stand firm with immigrants in Never Again is Now!

I am For Freedoms because everyone deserves the Four Freedoms FDR presented to the nation, regardless of race, gender, sexual orientation, religion or other differences that distinguish us.”

Artist Statement: “Soy Válida is an attempt to offer empowerment and amplify voices of the Latinx community while the U.S. government’s current immigration policies cultivate fear and discrimination. My recent mentorship with a Latinx teen led to her sharing stories of her family’s lived experience in the United States. Yo Soy Válida honors the humanity and societal contributions of my mentee, her family and the Latinx community who deserve to be treated as allies rather than aliens.

Soy Válida also references my performative interaction, VALIDnation, launched in 2012 as a response to my own experience of discrimination and invalidation as my home state of North Carolina passed Amendment One banning same-sex marriage. VALIDnation is a continued attempt to engage people in conversation about the validity of all relationships and communities. As a member of the LGBTQ+ community, I focus on countering hateful and divisive policies by using creativity to celebrate self-expression and inspire unity.

I am FOR FREEDOMS because I believe all humans deserve to be treated with love, dignity, and respect. We must recognize that we, the people of the United States, experience ‘freedoms’ differently based on our individual privilege within the context of U.S. history. With this awareness and knowledge, we can use our resources to empower and uplift voices of those who are targeted with hate yet continue to contribute to the culture and prosperity of this country. We can transform negativity into fuel for our own personal participation and collective civic engagement to better ourselves, our families and our communities.”

Artist Statement: “Everything in a polarized era becomes a bit of a Rorschach test – we fit what we are seeing into our already held beliefs, to see what we want to see. The For Freedoms 50 State Initiative seeks to break this binary choice by presenting billboard images that are hard to categorize yet point to our shared humanity. As an artist, I am happy to join with For Freedoms and 21c in the belief that in divisive times art can illuminate- showing the world as it is and pointing to the world as it can be.

The two billboard images are of existing work from my art practice which is known for reordering cyclical rotations of history to blur the idea of linear progress.

Indivisible is from an unwoven flag series I have been making for over a decade. Here, the American flag is unwoven string by string and partially rewoven with the star field in line, but the stripes going in opposite directions.  It becomes unclear if it is coming together or coming apart, but reminds us that the fabric of America can only exist with unity.

The HUMMER Stagecoach, in the 21c collection, is from the Futurama series where the 1939 GM Worlds Fair exhibit and depression era Hoovercarts are touchstones for a work that has particular resonance in this polarized era – where some look backward as a way to move forward and others, looking forward, feel as if they are moving backward. During the Great Depression of 1929, people could no longer afford gasoline for their newly financed cars, so in the rural South, the solution was to hitch the cars to a horse. The resulting contraption started off as a utilitarian object but became a political symbol known as a Hoovercart to deride President Hoover who was blamed for the depression. As the country emerged from the Depression, the General Motors 1939 Futurama Worlds Fair exhibit envisioned a future American utopia made possible by the automobile. This vision encapsulated the coming consumer economy that would make America the envy of the world. “Come” invited the Futurama’s narrator, “Let’s travel into the future… what will we see.” Built during the height of the Great Recession of 2008, The CEO Stagecoach simultaneously looks forward and backward – exploring the boom and bust of American economics, consumption, sustainability, raising complicated questions about our national founding myths, Manifest Destiny, and American exceptionalism.” 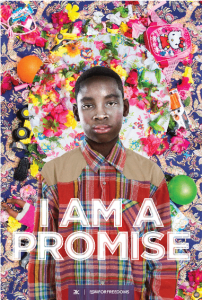 Artist Statement: “The image is taken from a larger body of called ‘…when they grow up ‘. The series of work pictures black children in varying ages engaged in mundane activity. The work seeks to capture the innocence and the possibility of innocence that is often denied to black youth. The text ‘I AM A PROMISE” references a children’s hymn incredible declaration taught to children at a very young age. But what happens when the society doesn’t see you as a promise, as a gift, as someone that has all of this potential to be cared for, what happens when society doesn’t see you only as a promise but rather as menace and threat? What happens to a promise that is unrealized?

Titus Kaphar, Behind the Myth of Benevolence

Artist Statement: “Behind the Myth of Benevolence attempts to give presence to the hundreds of thousands of untold and hidden narratives about usurped liberty – made famously apparent through the story of Jefferson’s enslaved woman Sally Mae Hemmings, who was the mother of his children. Extensive documentation of this relationship tells us that Sally Mae was very light skinned. I chose to make her skin darker in this work to evoke the countless women whose liberty was taken from them at the hands of powerful men. This work attempts to give presence and voice to these erased histories. I am For Freedoms because, throughout history, artists have been at the center of civic dialogue, creating the placards, billboards, and banners that movements for liberty, justice, and peace have gathered behind.”

Artist Statement: “The subject of my billboard is a portrait and quote from the Civil Rights Activist Bayard Rustin: ‘The only weapon we have is our bodies, and we need to tuck them in places so wheels don’t turn’. Bayard Rustin was an American leader in social movements for civil rights, socialism, nonviolence, and gay rights.”

Artist Statement: “I grew up in a family where love overruled. My cousin, Songha Willis, was murdered in Philadelphia in 2000. A month after he died, I found a recording of the incident, and his last words were ‘love over rules.'”

Justin Brice Guariglia, We Are The Asteroid

Artist Statement: “I’m For Freedoms because artists today can be a positive force for making social and political change by giving us new ways to see and understand the world around us.”