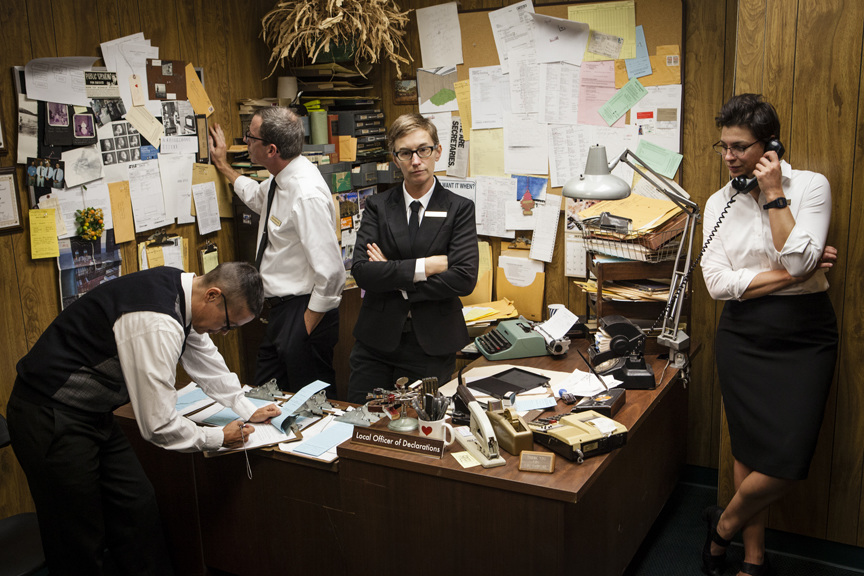 21c Museum Hotels is thrilled to announce that Durham-based artist Stacey Kirby was the winner of the $200,000 Grand Jury Prize at ArtPrize 2016 for her interactive performance and installation, The Bureau of Personal Belonging.

Artist Stacey Kirby took home a $5,000 grant awarded at the first ArtPrize Pitch Night event of 2016, held earlier this year at 21c Museum Hotel in Durham, North Carolina, for The Bureau. A panel of art experts chose this project over the work of four other artists — each given five minutes and five slides to sell their idea of an ambitious installation for ArtPrize Eight in Grand Rapids.

The Bureau of Personal Belonging is an installation comprised of three ongoing works where visitors offer written and verbal responses as they interact with the artist and other performers within a meticulously recreated 60’s era bureaucratic office space. Visitors are taken through a process to determine if they are indeed valid members of our community. The work points to the often absurd way bureaucracies define identity — particularly sexual and gender identity — and encourages viewers to contact Michigan lawmakers regarding certain pieces of legislation.

About ArtPrize
ArtPrize is an international art competition, open to any artist and decided by public vote. It invites artists to try out new ideas on a large and diverse population of people. It seeks to broaden the critical dialogue around contemporary art by awarding the world’s largest art prize. Two $200,000 awards are decided by public vote and expert jury, and an additional $100,000 in prizes is awarded to the top entries in each category. Registered artists and venues connect online at artprize.org and agree to present the artwork for public display during the 19-day event. The public votes using mobile devices and the web to distribute their awards, while a group of international art experts determines the winners of the juried awards. ArtPrize Eight will include 1,453 entries representing 44 countries and 40 U.S. states and territories. ArtPrize annually attracts more than 400,000 active participants. Since its inception, individuals of all backgrounds have cast more than 2.8 million votes for public art.

The Dick & Betsy DeVos Family Foundation is the Founding Sponsor of ArtPrize.