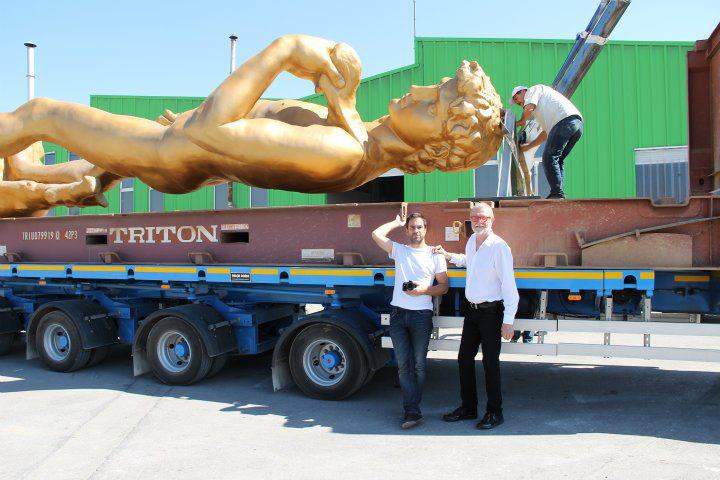 Serkan Ozkaya’s David (inspired by Michelangelo), a double-size, golden replica of Michelangelo’s David, is on the road. David’s journey began in Turkey, and will conclude over the next several weeks as he travels from New York City to Louisville. Follow his journey on Facebook and Twitter to track his progress down the interstates and highways of the US, drawing curious looks and lots of attention.

Conceptual artist Serkan Ozkaya made David (inspired by Michelangelo), a double-size, golden replica of Michelangelo’s David, for the 9th International Istanbul Biennial in 2005. Days prior to the opening of the Biennial, the sculpture collapsed shortly after installation. After the collapse, the artist restored the damaged replica and cast two additional copies, one of which was acquired by 21c Museum in Louisville, Kentucky. In 2011, 21c commissioned the 30-foot-tall work’s journey from Istanbul to 21c Museum in Louisville, Kentucky. David’s journey gets underway this March.