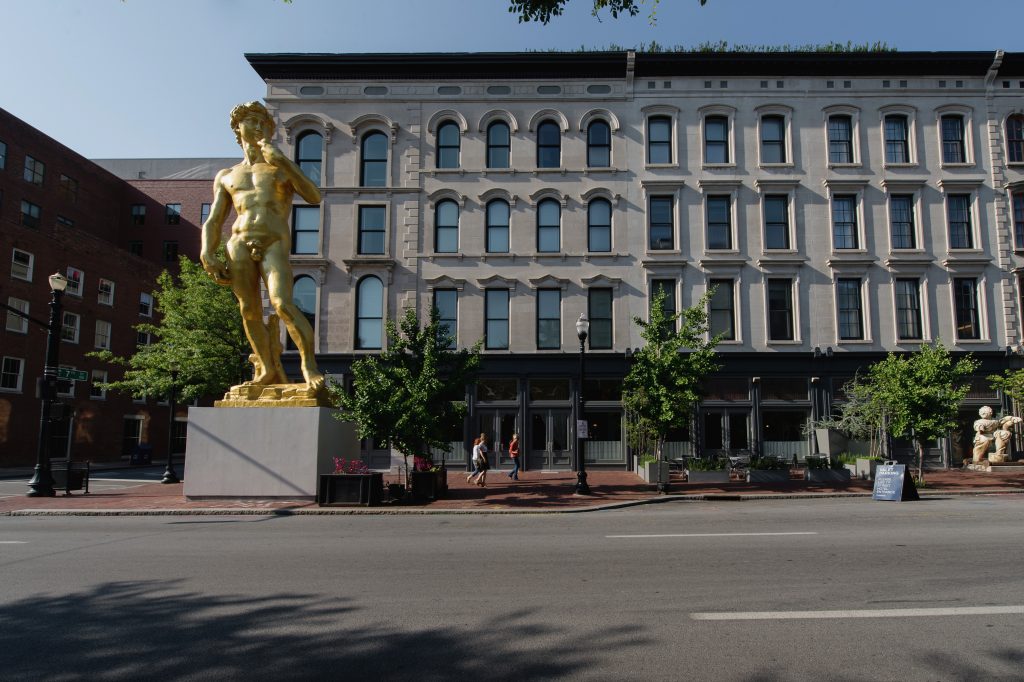 PRESS RELEASE – 21c Museum Hotel Louisville was named to Condé Nast Traveler’s prestigious Platinum Circle; it was announced today by Steve Wilson, co-founder and CEO of 21c Museum Hotels. The hotel, combining a 9,000 square foot contemporary art museum, 90-room boutique hotel and Proof on Main restaurant, is one of 56 U.S. properties to make the list of 182 hotels and resorts. The Platinum Circle is part of the magazine’s 2013 Gold List, which is comprised of the results of the annual Readers’ Choice Survey and is featured in the January issue each year. To be included in the Platinum Circle, a property must have been selected to the Gold List five years running. 21c joins some of the world’s most spectacular hotels and resorts in the Platinum Circle. U.S. properties that made the list include the Park Hyatt Chicago, The Breakers Palm Beach, Auberge Du Soleil Napa Valley and the Ritz-Carlton Laguna Niguel.

21c was named the #1 Hotel in the South earlier this year by the readers of Condé Nast Traveler magazine in the 2012 Condé Nast Traveler Readers’ Choice Awards featured in the November issue. 21c topped a list of 50 hotels in the South, which also includes Blackberry Farm in Tennessee, St. Regis Atlanta and Planters Inn located in Charleston. 21c also ranked #22 in the world, and is one of only five U.S. hotels to appear in the top 25, competing against brands such as Taj and Four Seasons. This year nearly 50,000 individuals participated in the Readers’ Choice voting, almost doubling last year’s number of 26,000 participants. Readers selected a total of 1,306 winners, prompting the magazine to break the results down by region. Rankings are based on the quality of rooms, service, food and dining, location and overall design.

About the Readers’ Choice Survey
Methodology: The Condé Nast Traveler Readers’ Choice Survey, begun in 1988, is available through a secure Web site at condenasttraveler.com/vote.  This year’s tabulations of 46,476 responses were done by Global Market Insite, Inc., of Boston. Organization: The questionnaire contains lists of candidates in various categories (Cities, Hotels, etc.). Individual candidates are judged by relevant criteria for each.  Those that receive a required minimum number of responses are deemed eligible for a Readers’ Choice Award.  Evaluation: Each candidate is rated, criterion by criterion, on a five-point scale: excellent, very good, good, fair, and poor.  Those scores, which represent the percentage of excellent and very good ratings, are averaged to calculate the final score published here.  For example, King Pacific Lodge’s rating, 96.9 is the average of its scores for all criteria: Food/Dining, Location, Overall Design, Rooms, Service, and (for resorts) Activities/Facilities. For more information visit www.condenasttraveler.com/rca.

About 21c Museum Hotels
Founded in 2007, 21c Museum Hotels is a growing company that oversees the expansion and management of 21c Museum Hotels nationally. 21c Museum Hotel was founded in Louisville, Kentucky by Laura Lee Brown and Steve Wilson, contemporary art collectors and preservationists, who had a vision for bringing art into people’s daily lives and supporting the revitalization of their hometown. The couple selected architect Deborah Berke to convert five 19th century tobacco and bourbon warehouses into a 90-room boutique hotel, contemporary art museum, award-winning restaurant Proof on Main, and cultural civic center in the heart of downtown Louisville. The property’s 9,000 square feet of contemporary art space features a rotating program of curated exhibitions as well as site-specific commissioned installations. 21c Louisville has earned top honors five years in a row in the Condé Nast Traveler annual Readers’ Choice survey and was voted among the top hotels in the world. With the success of the Louisville property, and with strong local partners who share the belief that art can be an economic driver for a community, 21c is expanding outside of Louisville. 21c Cincinnati opened in November of 2012, in the 100-year-old former Metropole Hotel building in the heart of downtown’s Backstage District. Offering 8,000 square feet of exhibition and meeting space, multi-media site-specific art installations, 156 rooms and a spa and rooftop bar. The property also features Metropole restaurant led by chef Michael Paley. The company will open its third hotel in Bentonville, AR in the first quarter of 2013; and future properties have been announced in Lexington, KY and Durham, NC.