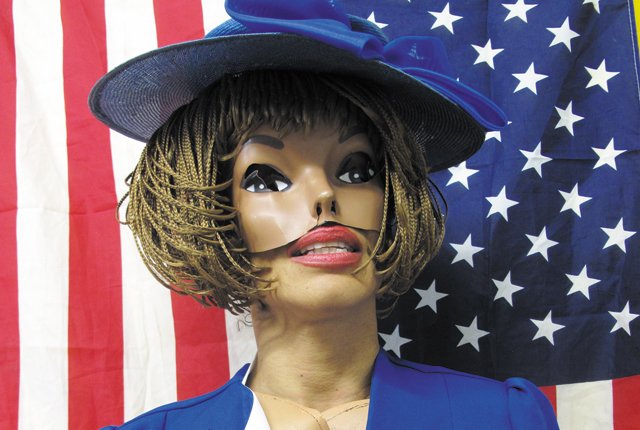 Acclaimed performance artist Narcissister joined the party opening night, treating the community to a pair of thought-provoking performances. “21c is committed to presenting the work of visionary artists like Narcissister,” says Chief Curator Alice Gray Stites. “Her performances are funny, sexy, profoundly insightful, and impossible not to watch once she steps onstage. As acts of extreme physical, intellectual, and creative exertion, Narcissister pushes buttons and boundaries, occupying the edge of what art can be and do today–a space 21c supports and explores.”

ABOUT THE ARTIST
Narcissister employs a spectacle-rich approach to explorations of gender, racial identity, and sexuality. Humor, pop songs, elaborate costumes, contemporary dance, and her trademark mask are her tools in deconstructing stereotypical representations. By opening up and turning against themselves what Stuart Hall calls “fixed and closed stereotypical representations,” Narcissister exposes, in live performance, video and photography, the practice of representation itself, and challenges the audience to question its own attraction and repulsion.

Narcissister questions fetishism, particularly sexual fetishism, which is notorious in its fixing of racist and gendering stereotypes.  Rather than abandon this contaminated site, Narcissister dives headlong into the muck, into the depths of the fantasy and fetish itself, to expose and deconstruct their power. Intervening in the exchange between the image and its psychic meaning uncovers the collective fantasies with which we invest these images, and forces representation open.

Both Narcissister’s name and her mask reflect the double dynamic created with the work. The Narcissister mask is a repurposed wig display form designed in Los Angeles in 1965 by female entrepreneur Verna Doran.  Falling within the narrow conception of femininity and beauty still predominant in the culture, the mask draws in the viewer; simultaneously, the mask – a tool for acquiring and establishing superiority and separation – pushes the viewer away.  Similarly, the name Narcissister, while evoking the dysfunction of narcissism, also connotes – through humorous punning – both sisterhood and concerns beyond the self. Self-absorption thus gives way to self-scrutiny through the expansive collection of both culturally significant and culturally debased characters she portrays.

Always staying true to her essential self (a self embodied by the mask), Narcissister enacts the shifting and changing of roles and identities skillfully and gracefully, a nod to the need to accept and surrender to impermanence in the Buddhist sense. Wearing the mask, and portraying a variety of roles, Narcissister is an example of a visceral and kinesthetic experience of seeing the world through another’s eyes, of seeing another point of view, and thereby allowing for a broader transpersonal experience.