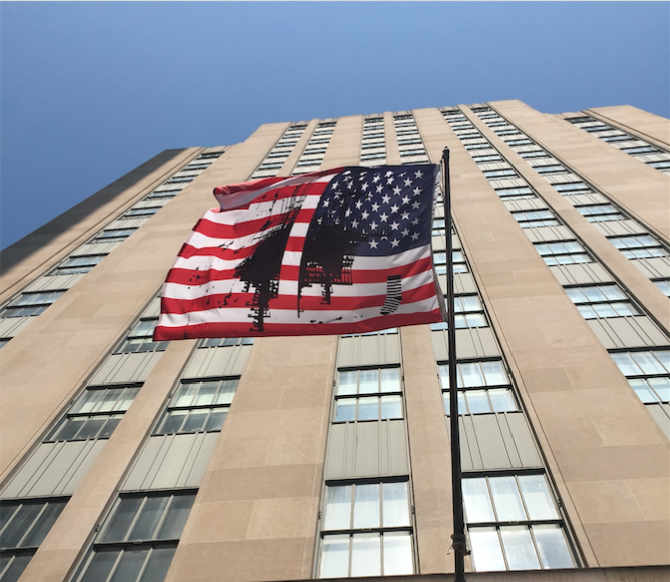 Meckseper’s flag is both a collage of an American flag and fragments of one of her earlier works, “Goodbye to Language.” A black-dripped color field resembles a United States map, divided in two. The black and white sock tackles a more symbolic meaning of polarization but also stands for creating a dialogue about the collective future of our planet. Pledges of Allegiance aims to inspire a sense of community among artists and cultural institutions. Each month, a new flag has been raised on a flagpole atop Creative Time’s headquarters at 59 East 4th Street and at participating arts, educational, and cultural organizations across the country. Over the duration of the project, Pledges of Allegiance flags have flown at more than thirty sites nationwide. Josephine Meckseper’s flag is the last of the sixteen public artworks.

“The flag is a collage of an American flag and one of my dripped paintings which resembles the contours of the United States. I divided the shape of the country in two for the flag design to reflect a deeply polarized country in which a president has openly bragged about harassing women and is withdrawing from the Kyoto protocol and UN Human Rights Council. The black and white sock on my flag takes on a new symbolic meaning in light of the recent imprisonment of immigrant children at the border. Let’s not forget that we all came from somewhere and are only recent occupants of this country – native cultures knew to take care of this continent much better for thousands of years before us. It’s about time for our differences to unite us rather than divide us.” — Josephine Meckseper

>Learn more about the project

Josephine Meckseper was born in Germany. She uses commercial forms of presentation to demonstrate inextricable influences of consumer culture on society. Meckseper melds the aesthetic language of modernism with the formal language of commercial display, combining them with images and artifacts of historical undercurrents and political protest movements.

Creative Time, the New York-based public arts non-profit, is committed to working with artists on the dialogues, debates, and dreams of our time. Creative Time presents the most innovative art in the public realm, providing new platforms to amplify artists’ voices, including the Creative Time Summit, an international conference convening at the intersection of art and social justice.

Since 1974, Creative Time has produced over 350 groundbreaking public art projects that ignite the imagination, explore ideas that shape society, and engage millions of people around the globe. Since its inception, the non-profit organization has been at the forefront of socially engaged public art, seeking to convert the power of artists’ ideas into works that inspire and challenge the public. Creative Time projects stimulate dialogue on timely issues, and initiate a dynamic experience between artists, sites, and audiences.