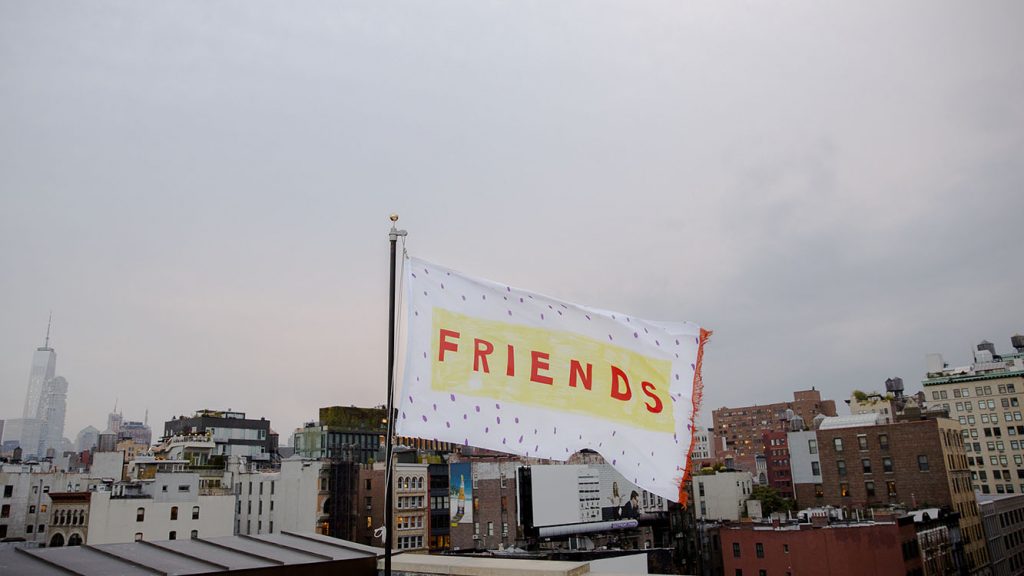 This morning at 10 a.m., in partnership with Creative Time, 21c Museum Hotel Durham hoisted the ninth public artwork in the nationwide Pledges of Allegiance series, Friends (for Ree) by artist Alex Da Corte.

Da Corte’s flag is an exact replica of a drawing made by the late artist Ree Morton between May 1974 and June 1975, as part of a project idea called Something in the Wind. Ree Morton, whose life was cut short at 40, was a post-minimalist known for her handmade embroidered works. The flag celebrates friendship as an organic bond, and an act to create accidental families. The physical version of this flag was never realized during the artist’s lifetime—Alex Da Corte pays homage to the late artist by bringing her work to life. “In celebration of Ree and all of the friend families we form, may we grow stronger and stranger every day,” says Alex Da Corte .

In a gesture of solidarity, the flag will be raised simultaneously at the following sixteen locations: Creative Time headquarters at 59 E 4th Street in New York, NY; University of South Florida Contemporary Art Museum in Tampa, FL; Museum of Contemporary Art Detroit (MOCAD) in Detroit, MI; Herbert F Johnson Museum of Art at Cornell University in Ithaca, NY; KMAC Museum in Louisville, KY; RISD Museum at Rhode Island School of Design in Providence , RI; Wassaic Project in Wassaic, NY; Paper Chase Press in Los Angeles, CA; The Union for Contemporary Art in Omaha, NE; Atlanta Contemporary in Atlanta, GA; California College of the Arts in San Francisco, CA; Zimmerli Art Museum, Rutgers University in New Brunswick, NJ; Mid America Arts Alliance in Kansas City, MO; The Commons, in partnership with the Spencer Museum of Art, University of Kansas in Lawrence, KS; Texas State Galleries at Texas State University in San Marcos, TX; and 21c Museum Hotel in Durham, NC. Da Corte’s flag will fly for the remainder of the month before being replaced by the next Pledges of Allegiance flag.

> Learn more about the project

Alex Da Corte was born in Camden, New Jersey, in 1980. Da Corte has had solo exhibitions worldwide, including The Museum Boijmans van Beuningen, the Herning Museum of Contemporary Art, Art + Practice, and MASS MoCA, for his first survey entitled Free Roses. His collaborative work with Jayson Musson, Easternsports, originally commissioned for the Institute of Contemporary Art in Philadelphia in 2014, was recently included in the group exhibition Dreamlands: Immersive Cinema and Art, 1905–2016 at the Whitney Museum of American Art. His new immersive installation, Slow Graffiti, will be on view this summer at Vienna Secession. He lives and works in Philadelphia.

Creative Time, the New York based public arts non-profit, is committed to working with artists on the dialogues, debates, and dreams of our time. Creative Time presents the most innovative art in the public realm, providing new platforms to amplify artists’ voices, including the Creative Time Summit, an international conference convening at the intersection of art and social justice.

Since 1974, Creative Time has produced over 350 groundbreaking public art projects that ignite the imagination, explore ideas that shape society, and engage millions of people around the globe. Since its inception, the non-profit organization has been at the forefront of socially engaged public art, seeking to convert the power of artists’ ideas into works that inspire and challenge the public. Creative Time projects stimulate dialogue on timely issues, and initiate a dynamic experience between artists, sites, and audiences.