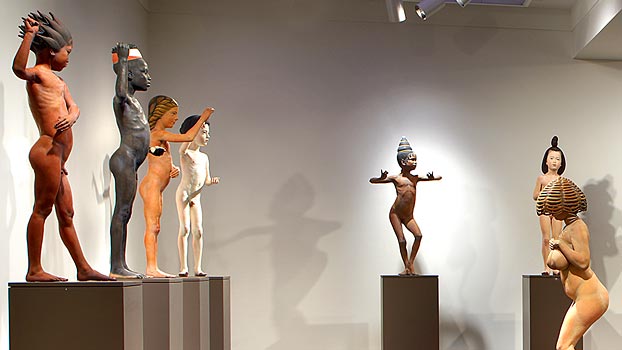 PRESS RELEASE – 21c Museum Hotels is proud to bring eight site-specific installations, and two multi-media group exhibitions by both emerging and internationally acclaimed artists, to the city of Cincinnati. Curated by Chief Curator and Director of Art Programming Alice Gray Stites in collaboration with 21c founders Laura Lee Brown and Steve Wilson, these exhibitions are emblematic of the founders mission to share new art and ideas with the public. 21c Museum Hotel (609 Walnut Street) has 8,000 square feet of museum space, which doubles as meeting and event space, solely dedicated to exhibiting the art of the 21st century. The Museum is open to the public free of charge, 24 hours a day, seven days a week, featuring rotating curated exhibitions, site-specific multi-media installations, and other cultural programming such as poetry readings, film screenings, artist lectures, and live performances. The Cincinnati property creates a downtown multi-venue museum and is the second 21c Museum Hotel to open in addition to the 21c Louisville.

“21c is dedicated to integrating contemporary art into daily life, and to expanding the audience for new art from all over the world,” says Stites. “Joining Cincinnati’s vibrant cultural community will create exciting opportunities for 21c to present a broad range of programming in the heart of downtown, and to collaborate with other civic and cultural institutions. The scope of Cincinnati’s art scene is inspiring; we look forward to fostering partnerships that will enhance and advance the cultural life of the city.”

Located adjacent to the Lois and Richard Rosenthal Center for Contemporary Art and across the street from the Aronoff Center for the Arts, 21c Museum Hotels tapped architect Deborah Berke to renovate and restore the 100-year-old former Metropole Hotel in downtown Cincinnati, recently listed on the National Register of Historic Places. In addition to the Museum, the property includes a 156-room boutique hotel and Metropole restaurant led by executive chef Michael Paley, whose menu is built around dishes cooked on a custom-built, wood-burning fireplace. The following works and exhibitions are currently on display:

ILLUMINATI: SITE-SPECIFIC ART AT 21c CINCINNATI
“Illuminati” is a collection of interactive, new media projects designed to engage viewers with art, light, space, and each other. These works, on long term display, create opportunities for visitors and the community to return to experience dynamic artworks that change, reflect and animate their surroundings over the course of time. Featured artists and their works are:

INAUGURAL EXHIBITIONS:
OFF-SPRING: New Generations, Featuring Power Play by Judy Fox.  A pioneer of painted figuration, American artist Judy Fox infuses the Western figurative tradition with a contemporary consciousness of the body that addresses the development and expression of identity. Presented together for the first time, Power Play combines two related installations featuring four children with an adult of the opposite gender; the girls and a woman are posed as different cultural or ethnographic embodiments of femininity, while the boys and man enact varying typologies of masculine domination, effectively creating an immersive family tableau and a global, timeless theatre of gender politics. Rituals—religious and cultural, institutional and domestic—provide the thematic infrastructure for the works featured in OFF-SPRING: New Generations. Like Fox’s explorations of identity, childhood, family, history, and gender politics, these sculptures, paintings, photographs, and videos employ iconographic imagery to reveal how we live, love, and learn in the 21st century. At the baptismal font or the family dinner table, within the fantasy of childhood play or the familiarity of grown-up habit, these new, old narratives amplify or extend aspects of Power Play, generating a spectrum of meditations on the contemporary construction of self and society. Featured artists include Gerhard Demetz, Anthony Goicolea, Gottfried Helnwein, Ellen Kooi, leonardogillesfleur, Guy Ben Ner, Julie Nord, Josephine Taylor, Kara Walker, Carrie Mae Weems, Sam Taylor-Wood, and Vee Speers. This exhibition will be on view throughout the first and second floor gallery spaces until June 2013.

OFF-SHOOT: Serial Explorations presents a wide-ranging investigation of identity, history and the liminal space between fantasy and reality through works created in series. Imaginary portraiture is examined by artists Annie Kevans, Loretta Lux, and Kay Ruane. Kevans’ series “All the Presidents’ Girls” represents the artist’s envisioning of the purported lovers of U.S. heads of state, exploring the manipulation of truth in the recording of history, while highlighting those that were marginalized. The carefully drawn, well-dressed figures in Ruane’s “Spoon Sisters” and “To The Tracks” evoke other eras, emerging from an undefined past. In fact, the artist uses herself and those familiar to her to create scenes varying in time and space, plumbing imagined pasts to explore present identity. In Loretta Lux’s eerie, painterly portraits of ethereal children, past and present merge with futuristic fantasy. Artist Sanford Biggers addresses interconnected cultural legacies, referencing popular culture, African American history, European literature and Eastern philosophy with his work “Cheshire.” The illuminated Plexiglas and LED sculpture manages to be ambiguous and provocative at once, a hallmark of the artist’s work. As part of 21c’s mission to showcase local and regional artists, the exhibition also features the photography of Louisville-based Sarah Lyon and Cincinnati-based Jay Bolotin’s whose works combine biblical, mythological and historical references to tell elaborate stories. This exhibition will be on view in Metropole restaurant until June 2013.

About 21c Museum
A multi-venue museum, 21c was founded by Laura Lee Brown and Steve Wilson, contemporary art collectors and preservationists who are committed to bringing works of art to the public through innovative exhibitions and programs that integrate contemporary art into daily life. 21c Museum presents a range of arts programming curated by Chief Curator and Director of Art Programming Alice Gray Stites, including thought-provoking solo and group exhibitions that reflect the global nature of art today, site-specific, commissioned installations as well as a variety of cultural programming. The organization also loans works of art to major museums—past loans include MASS MoCA, the Contemporary Art Museum Houston, and the National Gallery of Ontario—and collaborates on arts initiatives with artists and cultural organizations worldwide. Since opening in Louisville, KY in 2006, the Museum has presented more than 75 exhibitions including Blue: Matter, Mood and Melancholy; Alter Ego: A Decade of Work by Anthony Goicolea; Ann Hamilton: Bookweights; Consuming Cultures: A Global View; Cuba Now; Simen Johan: Until the Kingdom Comes; Creating Identity: Portraits Today; All’s Fair in Art and War: Envisioning Conflict; and Hybridity: The Evolution of Species and Spaces in 21st-Century Art.

About 21c Museum Hotels
Founded in 2007, 21c Museum Hotels is a growing company that oversees the expansion and management of 21c Museum Hotels nationally. 21c Museum Hotel was founded in Louisville, Kentucky by Laura Lee Brown and Steve Wilson, contemporary art collectors and preservationists, who had a vision for bringing art into people’s daily lives and supporting the revitalization of their hometown. The couple selected architect Deborah Berke to convert five 19th century tobacco and bourbon warehouses into a 90-room boutique hotel, contemporary art museum, award-winning restaurant Proof on Main, and cultural civic center in the heart of downtown Louisville. The property’s 9,000 square feet of contemporary art space features a rotating program of curated exhibitions as well as site-specific commissioned installations. 21c Louisville has earned top honors five years in a row in the Condé Nast Traveler annual Readers’ Choice survey and was voted among the top hotels in the world. With the success of the Louisville property, and with strong local partners who share the belief that art can be an economic driver for a community, 21c is expanding outside of Louisville. 21c Cincinnati opened in November of 2012, in the 100-year-old former Metropole Hotel building in the heart of downtown’s Backstage District. Offering 8,000 square feet of exhibition and meeting space, multi-media site-specific art installations, 156 rooms and a spa and rooftop bar. The property also features Metropole restaurant led by chef Michael Paley. The company will open its third hotel in Bentonville, AR in the first quarter of 2013; and future properties have been announced in Lexington, KY and Durham, NC.