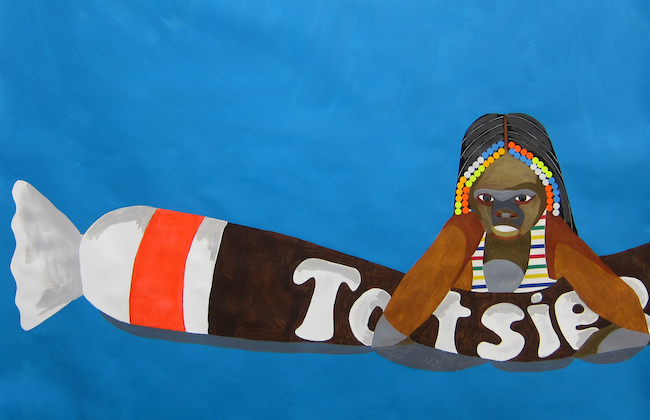 Please join us for the opening celebration of our newest exhibition, Pop Stars! Popular Culture and Contemporary Art. The event will feature an artist walk + talk tour and conversation with Derrick Adams and Chief Curator Alice Gray Stites led by host Rahsaan Gandy.

ABOUT THE EXHIBITION
Superheroes and celebrities, totems and toys: the imagery of manufactured fantasy is reframed in the visual language of historical iconography in this multi-media exploration of popular culture today. Culling from the canon of art history, mining the mass media, and scouring streets and screens, Pop Stars! demonstrates the dominance of the popular as today’s ubiquitous culture. The artists featured appropriate images and practices from commerce, science, politics, religion, sports, and technology, to illuminate recent shifts in how culture is being created and consumed, intertwining past and present in transformative new intersections of art and life.

ABOUT THE ARTIST
Derrick Adams is a multidisciplinary New York-based artist working in performance, video, and sound, as well as painting and sculpture. His artistic practice is rooted in Deconstructivist philosophies and the ways in which human ideals become attached to objects, colors, textures, symbols, and ideologies. Adams’ work focuses on the fragmentation and manipulation of structure and surface, exploring the shape-shifting force of popular culture on self-image and forward projection.

The process of learning functions as both subject and object in his art, which in turn derives from Adams’ experiences with the iconography of American culture. Immersed in the iconology of the contemporary world and attuned to its persuasive, performative, and sometimes misleading identities, Adams reflects upon the relationship between man and monument as they coexist and represent one another.

Recipient of a Studio Museum Joyce Alexander Wein Artist Prize (2016) and a Louis Comfort Tiffany Award (2009), Adams received his MFA from Columbia University and BFA from Pratt Institute. He is an alumnus of the Skowhegan School of Painting and Sculpture and Marie Walsh Sharpe Foundation’s Studio Program. Adams’ work has been presented in numerous important public exhibitions, including Greater New York (2005) at MoMA PS1; Open House: Working In Brooklyn (2004) at the Brooklyn Museum; PERFORMA (2005, 2013, and 2015); Radical Presence (2013–14) and The Shadows Took Shape (2014) at The Studio Museum in Harlem; and The Channel (2012) at Brooklyn Academy of Music.

Adams’ work resides in the permanent collections of The Metropolitan Museum of Art, Whitney Museum of American Art, The Studio Museum in Harlem, Virginia Museum of Fine Arts, and the Birmingham Museum of Art.