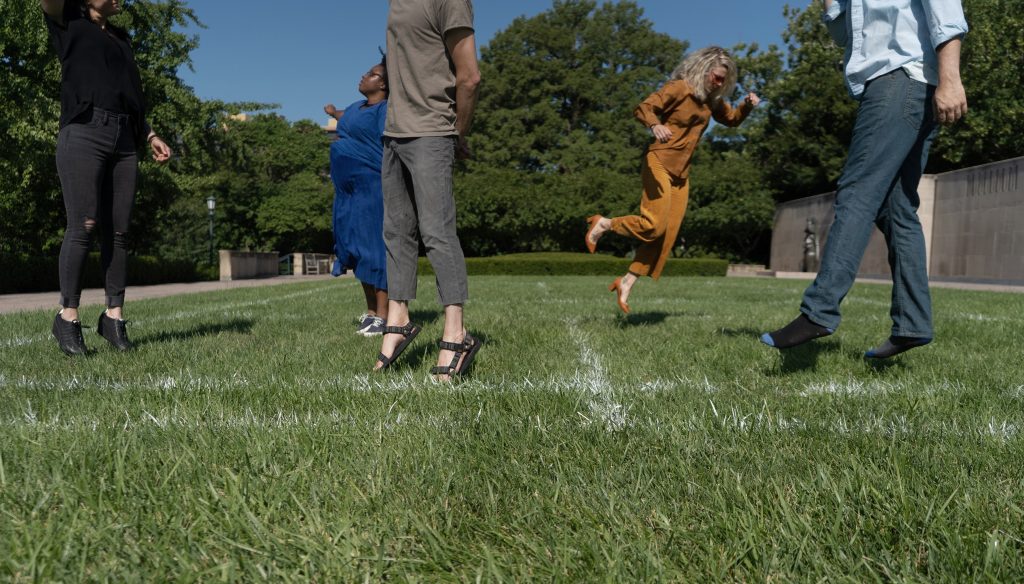 Can you clean the slate without settling accounts?
Reckoncile, RubiX’s fall performance series at 21c Kansas City, grapples with this question. This multidisciplinary, site-specific performance series invites audiences to immerse themselves in thoughts and emotions that often go unsaid. Whether in intimate partnership or in our environment and society, everyone inflicts and suffers hurt. So, what then? Join RubiX on September 13, October 11 and November 15 to explore themes of coexistence and compatibility, reparation and restoration.

RubiX  breaks creators out of disciplinary silos while bridging the gap between audience and performers. We are a performance outlet that brings musicians, dancers, visual artists and writers together to collaborate on transformative events. This ever-changing platform is rearrangeable to space, theme, media and content with a rotating talent pool, grounded by its founding six members: Haley Kostas, Conner Giles, Sarah Magill, Teresa Leggard, David Steele Overholt and Johnny Dawbarn.

Support for this work is provided by a Rocket Grants project award, a program of the Charlotte Street Foundation and the University of Kansas Spencer Museum of Art. Funding is provided by the Andy Warhol Foundation for the Visual Arts.

About the founding members:
Haley Kostas is a Greek American choreographer, dance artist, and educator based out of Kansas City. Haley attended the University of Missouri-Kansas City, Conservatory of Music and Dance, along with training abroad at The London Contemporary Dance School. Haley’s choreography and works have been presented and commissioned by various companies and universities across the nation, including her most recent work of ‘About Looking’ that premiered at Kansas City Ballet’s 2019 New Moves performance. She has worked alongside internationally recognized choreographers in the creation of new works and large-scale productions, such as live performances from The Juilliard School to the TV series SYTYCD. Professionally, she has danced in works by choreographers and companies such as Aszure Barton, Peter Chu, Marguerite Derricks, and with musical artists such as Katy Perry.

Conner Giles is an American multi-instrumentalist and composer based in Kansas City. As a guitarist, electronic music producer, and classically trained cellist and more, Giles has enjoyed an extensive and dynamic career. Through years of extensive national touring, he has shared the stage with a wide array of artists- from The Voice’s Taylor Phelan to the Transiberian Orchestra. He also performs regularly in collaboration with local and regional symphony orchestras. In the studio, Giles’ creative acumen is regularly sought to be included in projects ranging from programming in the digital realm to composing music for dance.

Teresa Leggard earned her English degree from Spelman College and her MFA in creative writing and media arts from the University of Missouri-Kansas City. As a poet (I-70 Review, Bear Review, Midwest African American Literary Journal, etc.), her work deals with notions of home and belonging. Her award-winning dramatic writing has featured female protagonists and addressed issues of ambition, education, ‘chastity’, and family. As a director (PASS OVER, THE GREEN BOOK WINE CLUB TRAIN TRIP, SINGLE BLACK FEMALE and more), Teresa is attracted to new works, emerging voices, and lesser-told stories.

David Overholt has been an instructor in Art and Design for nearly 20 years through graphic design, photography, lighting, videography, and new computer/electronic systems. He has taught a wide variety of media, including founding the Kansas City Art Institute’s Interactive Arts major. His work deals with oversaturation and consumption of marketing imagery, security and safety replacements, and self-identity through technology. David’s work has been seen nationwide and recognized by the Mid-America Arts Alliance, Charlotte Street Foundation, and National Endowment for the Arts.

Johnny Dawbarn is the founder of Collective EX. By expanding artists’ personal stories together, the collective provides creative environments and meaningful experiences where these artisans can begin to create, craft and collaborate within their expertise. John brings decades of experience as an entrepreneur (sewKC, 5 Points), creative thinker (Hallmark) designer/illustrator (Thou Mayest, SCION, KC Star), and musician (NoMathmatics) to this new venture.

To learn more, head to https://www.rubixproject.com/