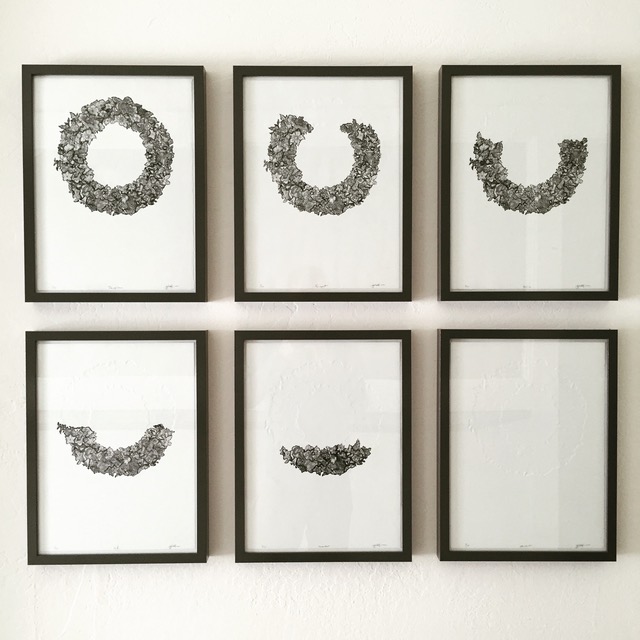 Please join for the official opening of our newest exhibition, Forms and Functions, by Jina Valentine and Jaydan Moore. The event will feature an informal gallery talk with the artists. A cash bar will be available. In Forms and Functions, Jina Valentine and Jaydan Moore investigate found materials and isolate the shapes and patterns within to reveal the meanings and metaphors embedded in seemingly random forms.

Drawing with ink on handmade paper, Jina Valentine reproduces the designs of the most gerrymandered congressional districts in the United States. The resulting shapes are varied, denying any logistical geometry, and thus reinforcing the absurdity of the process and protocols that determine how voting districts are defined—and redefined—over time.

Jaydan Moore cuts into old silver platters, and then inks and prints the engraved patterns on paper, building up the images in series.   Moore’s sculptures combine and juxtapose portions of these metal pieces in order to isolate or repeat patterns, creating new visual connections between the designs of these artefacts of domestic history.

About Jina Valentine
Jina Valentine was born in Pennsylvania and is currently based in North Carolina. Her interdisciplinary practice is informed by the intuitive strategies of American folk artists and traditional craft techniques, and interweaves histories latent within found texts, objects, narratives, and spaces. She is also cofounder of the oral-history archiving project Black Lunch Table.  Jina has exhibited at venues including The Drawing Center, The Studio Museum in Harlem, the CUE Foundation, the Elizabeth Foundation, the DiRosa Preserve, Southern Exposure, and Marlborough Gallery. She has participated in residencies at the Atlantic Center for the Arts, Women’s Studio Workshop, Sculpture Space, the Skowhegan School of Painting and Sculpture, the Santa Fe Art Institute, the Cité Internationale des Arts in Paris, the Joan Mitchell Center in New Orleans, Banff Centre in Alberta, and Frans Masereel Centrum in Belgium.  She was a 2016 recipient of the North Carolina Arts Council Grant, a Creative Capital Emerging Genres Grant, and a UNC Institute for Arts and Humanities fellowship.  Jina received her BFA from Carnegie Mellon University and her MFA from Stanford University.

About Jaydan Moore
Jaydan was born into a family of fourth generation tombstone makers in California. Most of his childhood was largely spent at the family business, which doubled as a rental storage space; where he would rummage through other peoples objects, and listen to families making arrangements for their loved ones. It is these experiences that made him value the heirlooms and objects we choose to use as markers for significant moments.

His career began as an undergraduate student at California College of the Arts, in Oakland, where Jaydan earned a BFA in jewelry and metal arts under Marilyn da Silva. While studying at CCA, he worked as a machinist and bench jeweler for the high-end metal production company, Svartvik Metal Works. Jaydan received his MFA and MA from University of Wisconsin-Madison under professors Lisa Gralnick and Kim Cridler, and was given a University Fellowship while there.

Upon completing his graduate degree, Jaydan has furthered his career through generous opportunities as an artist in residence at Houston Center for Contemporary Craft, as Fountainhead Fellow at Virginia Commonwealth Universities Craft/Material Studies Program, and a grant from the Peter S. Reed Foundation. He has shown in recent exhibitions at Kentucky Museum of Arts and Crafts, California College of the Arts, Page Bond Gallery (VA), Stephen F. Austin Universities Art Gallery (TX), Asheville Area Arts Council, Overture Gallery (WI), and Brooklyn Metal Works. He has also held teaching appointments at Virginia Commonwealth University in the Craft Materials Studies Program, California College of the Arts, and Houston Community College.

Jaydan currently has begun a three-year residency at Penland School of Craft. During this time he is creating new work that will be on display at Museum of Craft and Design (CA), Milwaukee Institute of Art and Design, Fuller Craft Museum (MA), Visual Arts Center of Richmond (VA), and Wilton House Museum (VA).

> Learn more about the exhibition
> RSVP and invite friends via Facebook