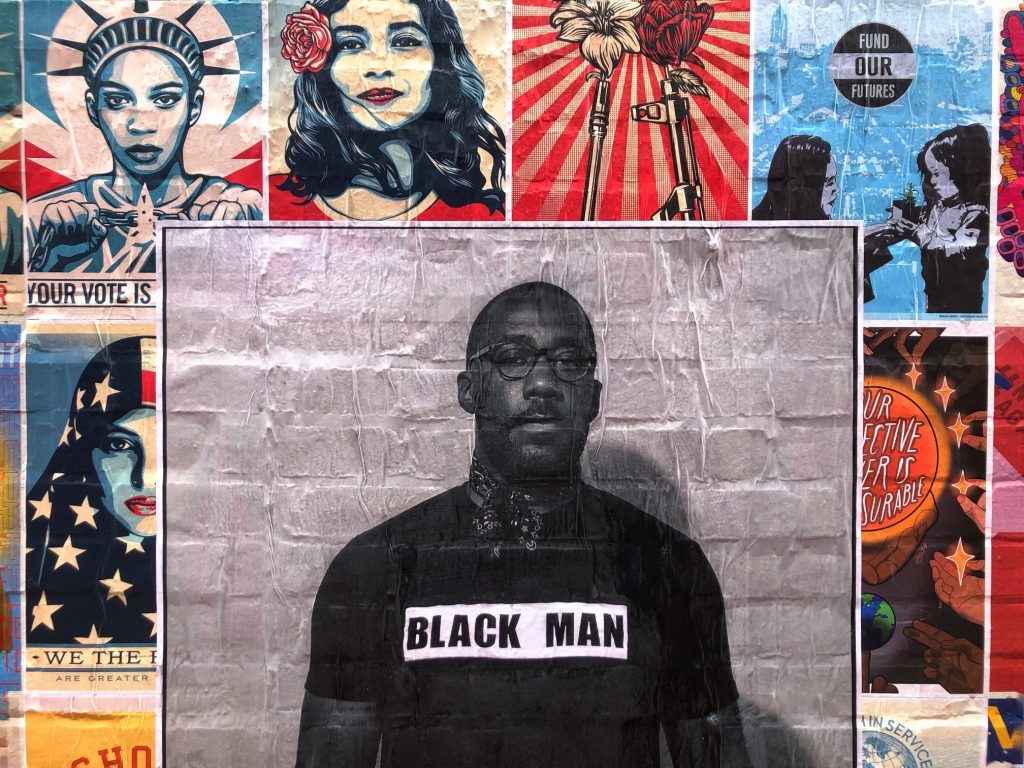 The new BLACK BOX mural on the side of 21c Cincinnati in Gano Alley is one part of a five-part community impact project designed by artist Michael Coppage to positively highlight Black men, promote understanding and empathy, and foster education and healing. Community members come into a safe space to see eye-to-eye with a diverse group of 13 black men. In print, each man stand’s 6’ tall and wears a shirt with an assigned noun preceded by the word BLACK, which becomes a prompt for discussion. Often times nouns that are preceded by black are negatively connoted and what we learn during our American enculturation is black most often implies “bad”. These are terms like black sheep, black ice, black cloud, black ball, and more. On the other-hand we often find that a noun or verb preceded by “white” is seen as a “positive” negative. These terms include examples like white collar crime, white lies, and white knight. This highlights an obvious bias.

For Coppage, one of the goals of the project is to help demystify and rehumanize black men by creating experiences for attendees that outweigh what they have “learned” during the enculturation process. By making people more aware of how we use and view colors we become more educated and aware of the social impact.

This part of the series resulted in 13 portraits of black side-by-side. Each man has a shirt with the word “black” preceding a noun. The last portrait is of the artist who is wearing a shirt that says Black Man. It is implied there is something negative about the man based on the color that describes him.

Our Museum Manager, Michael Hurst, recently sat down with Michael to ask him to expand on some of the ideas and themes of the new BLACK BOX mural. 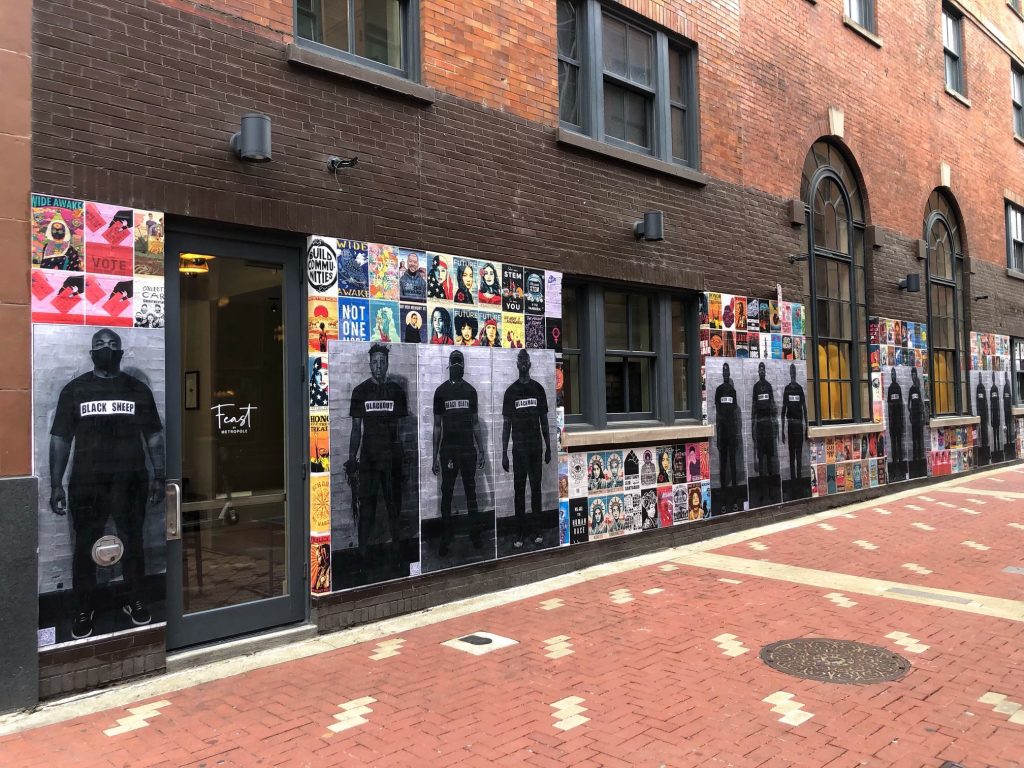 MH: Tell me about the twelve men who participated in this with you. How and why was this group assembled?

MC: I address the demonization of black men in my work, in part. However, I only speak about the black men I know personally who shape my experience of who black men are. The twelve men in the photos and the additional four in the podcast all represent a diverse cross-section of who black men are and can be. In direct opposition to the predominant narrative these men are doctors, businessmen, students, trainers, artists, coaches, mentors, multi-racial, queer, actors, teachers, scholars, pastors, fathers, advocates and the list goes on. These men represent how healthy, engaged and present black men are. They represent me in a way that fills me with pride, informs my role in society and instills confidence in my ability to become and obtain what I want for myself regardless of the obstacles. Everyone I asked to be a part of this project said “yes” without hesitation.

MH: What will it mean for you when you see yourself and your twelve collaborators installed on the front side of the 21c alley for the bulk of 2021?

MC: It’s interesting because I grew up playing in alleys with my friends. These are some of the fondest memories from my formative years. In a way it’s nostalgic for me. I’m more excited about being able to use the space to display life-sized images of the gentleman that engage the public in an ongoing dialogue that helps demystify black men. Presently, we live in a moment history we will remember and I’m honored to have the opportunity to display images I believe contribute to the historical narrative.

MH: This work is part three in this five-part series – can you tell us a little more about how this community impact project will look when it’s finished?

MC: When completed the BLACK BOX project will have resulted in a:

My hope is that the project is never “finished” but instead it continues to travel nationally and internationally in part, or in sum, and each part of the project becomes a single point of entry into the project at large.

I would like the project to expand into education settings, law enforcement, academia, healthcare and mental health sectors. It was made to be a tool for listening.

Currently parts of the project are scheduled to debut at the Cincy Fringe Festival in a film to help discuss how arbitrary racial categorization is and how it came to be. It is also currently being used as part of college curriculum as a classroom aid in first hand discussions about race and experience.

MH: You made a podcast called BLACK BOX which lives on Spotify, ad free, and each episode is a 10-minute (give or take) interview with each of the men represented in the mural. And you are adding QR codes to the mural so that visitors to Gano Alley can hear the voices of the men they’re standing in front of. In a way it acts like a street art audio tour as well as a gift that can be taken home with people. Tell me about that.

MC: I chose to host the podcast ad-free because a large part of my work addresses the appropriation of black culture and the profiteering off black trauma. I did not make this work to profit and I don’t want the people who are part of what I consider to be an important and intimate conversation distracted by marketing that likely brings no dollars back to the black community. There is no barrier between the viewer and the gentleman they choose to listen to. The QR code when scanned adds dimension to the overall experience but also brings each man to life. Adding voices to support the images reduces the likelihood of the viewer projecting their own bias ultimately replacing it with an authentic experience.

MH: Did one plant the seed for the other or were these two elements of the project (the mural and the podcast) created laterally?

MC: The podcast was meant to accompany all of the other parts of the project. I often sense how aware of my presence people are when I walk into a room. Outside of a workspace and a play space people seem to struggle with a black male presence. There’s a social distancing that has happened for far longer than it was a coined term. I can sense the anxiety and nervousness in the small talk I endure and often receive baseless apologies for walking past me or standing too close as if I had a short fuse and no one wanted trouble. I often talk about these experiences with other black men and chose to externalize this experience in a way that everyone benefits from. The podcast was designed to be the juxtaposition of the uncomfortable interpersonal physical experience. There is no physicality. Just a group of warm, therapeutic voices that comfort you in a way you’re not expecting. The result is a relaxed stress free experience you can have in public with the mural or in private with candles in a bathtub.

MH: Besides your BLACK BOX collaborators and 21c, are there any other partners that were critical in bringing this project to life?

MC: Yes! Wave Pool Gallery gave me $500 to start an experimental project a year ago. It would have still been on the back burner if it wasn’t for their leadership. The Contemporary Art Center in conjunction with Wave Pool gave me a space to execute BLACK BOX in person during a 5-hour micro residency. Adoria Maxberry was key in crafting the BLACK BOX shirts for the live session, the photos and the video. Taylor Gaston Davis Media recorded, mixed, mastered and edited all the audio and video aspects of the piece. ArtsWave awarded me a $10,000 truth and reconciliation grant to expand the BLACK BOX project in an effort to build cultural bridges and removed the financial barrier from my vision. None of this would be possible without their generosity.

MH: What has been your favorite part of BLACK BOX so far?

MC: My favorite part has been the conversations that come after someone has engaged in a part of the project. The social impact happens one person at a time but I can see it in real time.

MH: If you could pick one specific person to experience this in person, who would it be and why?

MC: I’m not sure I can narrow it down to one person because the project is a direct response to an American cultural norm. However, in almost every conversation I have had with people who have experienced the project they always identify someone who they believe needs to experience the piece and they pay it forward. That’s where the magic happens.

Originally, from Chicago, Michael Coppage has lived and worked in Cincinnati since 2007. He had a recent micro-residency at the Cincinnati Contemporary Art Center entitled BLACK BOX: a community impact project aimed at demystifying black men and creating authentic experiences that replaced bias and preconceived notions.

Coppage earned a B.F.A in Sculpture from Memphis College of Art and an M.F.A in Studio Art from The Pennsylvania Academy of the Fine Arts.

Learn more about Michael’s work from his recent TEDxUCincinnati Talk: Everybody is Racist!… and it’s okay!