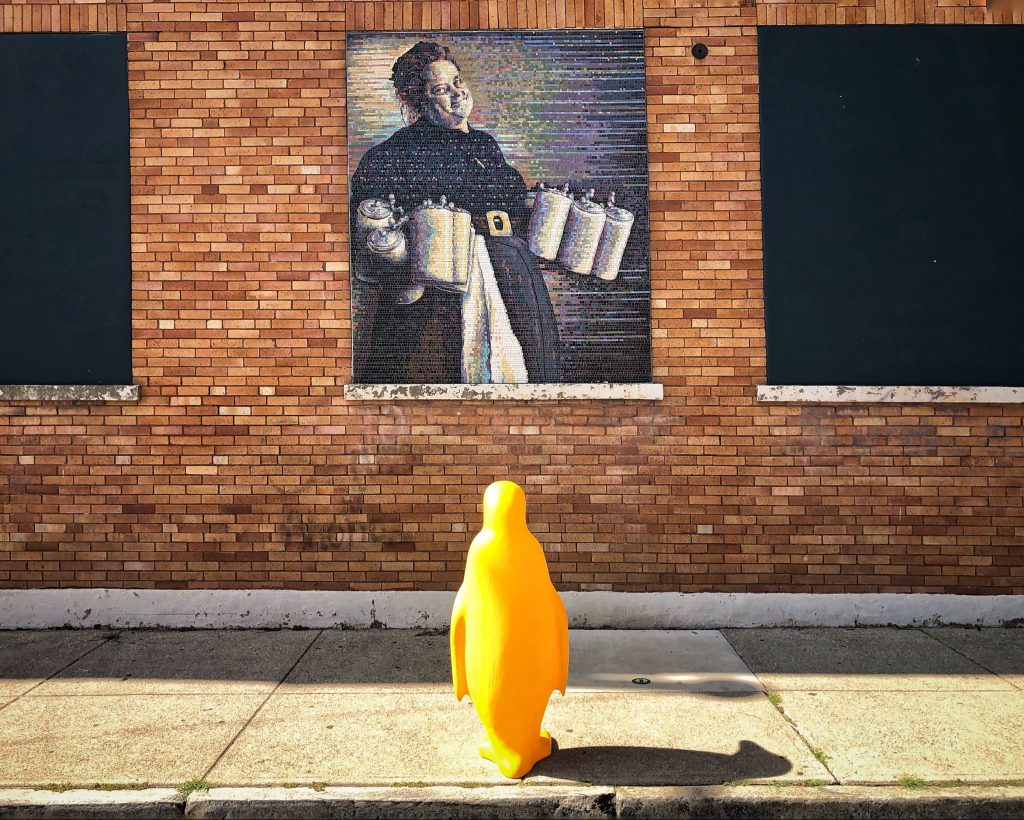 Love a good brew? We do too. Nothing beats a cold refreshing beer on a hot midwest summer day… and we’ve got a lot of good beer here in Cincinnati. One of our other favorite things about our city is the street art scene. Walk through any neighborhood in the Queen City and find yourself surrounded by colorful murals made by local artists (made possible by programs like ArtWorks Cincy). We thought, what better way to celebrate these two travel-worthy experiences than by creating a brewery + mural adventure — do it all in a day or take your time!

Ready to get started? Here is where you should grab a drink and the must-see-murals to visit along the way! Pro-tip: click here for a map. 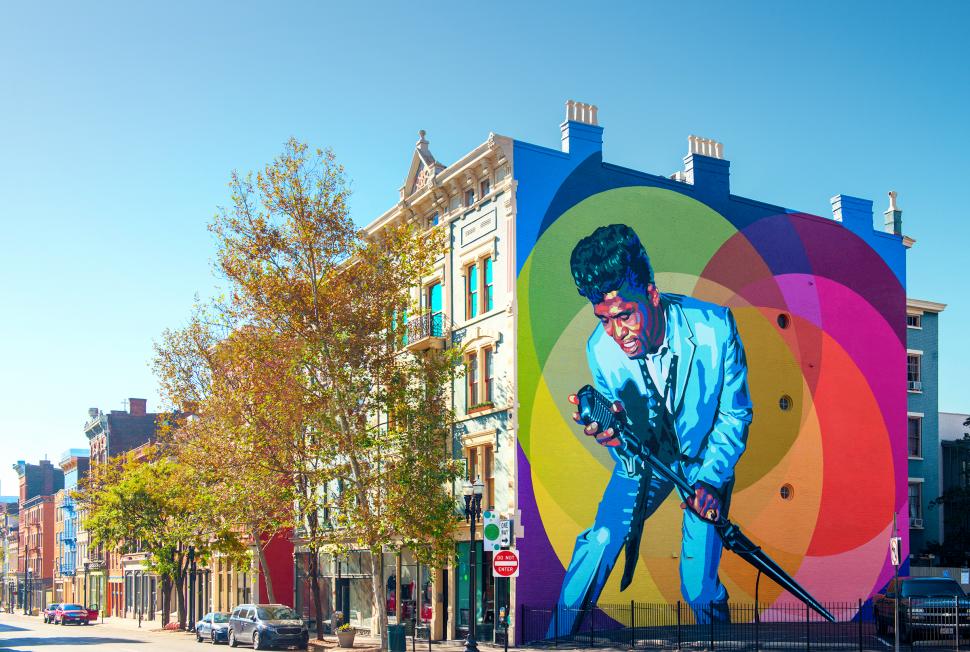 Your first stop, Taft’s Ale House. Enjoy an impressive lineup of house-made craft brews while you marvel at the architecture of this 130 year old former church. Visiting on a Monday evening? Be sure to join them for trivia!

Find this mural at 1537 Republic Street.

This one is for the boxing and Jazz fans. Ezzard Charles: The Cincinnati Cobra honors the late two-time World Heavyweight Champion and Cincinnati legend. Fun fact: this mural was the 100th mural to be completed since ArtWorks Cincy launched their program in 2007.

Designed by Jenny Ustick, the same artist who created the Vibrant Dreams mural in Gano Alley at 21c Cincinnati, Mr. Dynamite pays tribute to one of the most iconic and influential musicians of the 20th century, James Brown, who was a strong, outspoken advocate for civil rights and black self-empowerment.

Created as part of the Taft’s 80th Anniversary Celebration, “Art for All,” The Golden Muse features a figurine from an 18th century mantle clock in the Taft Museum of Art’s collection. 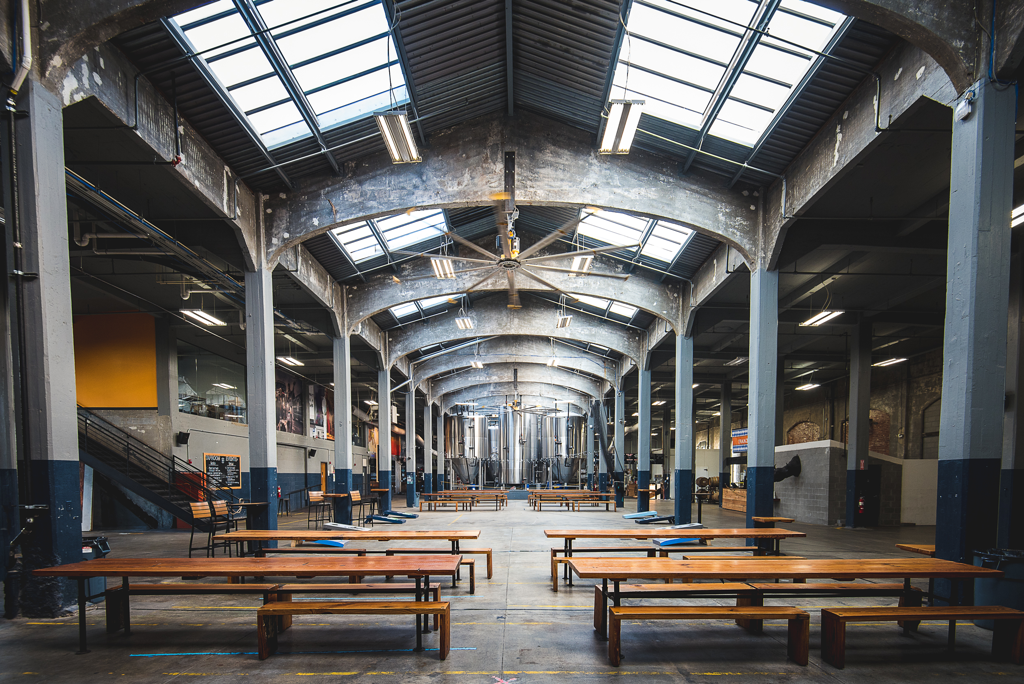 Your next stop… Rhinegeist. Formerly known as the Moerlein bottling plant, this massive warehouse taproom is like a giant indoor playground for adults – play cornhole, ping pong and more while you sip on your favorite brew. We highly recommend checking out their rooftop deck if it’s open (+21 over only)! Hungry? Order your favorite takeout or grab some grub at the food stand next door.

Find this mural at 1606 Pleasant Street.

Selected by the community, Swing Around Rosie, which highlights Hollywood start Rosemary Clooney, is another addition to the Cincinnati Legends Series.

What’s a brewery tour without a brewery mural? Created in partnership with Rhinegeist, Rise showcases the beauty of the brewing process.

You know those peculiar looking tiles in our showers? Well, they’re made by our friends over at Rookwood Pottery, a ceramic manufacturer based out of the Queen City since 1880. Inspired by Rookwood’s color palette and pottery, Rookwood Revival features various types of birds and flowers, representing the unique growth of the company. 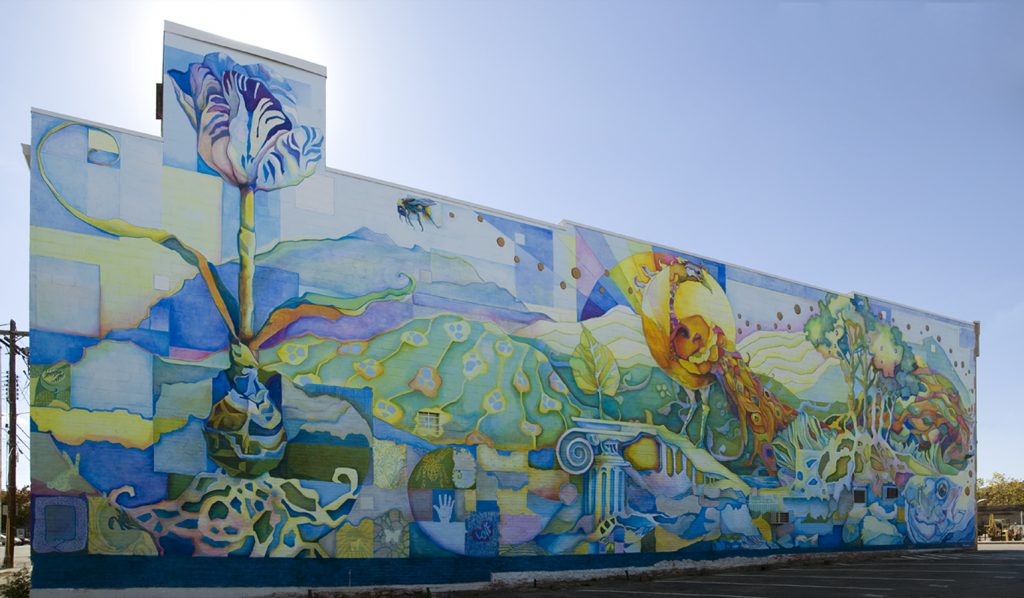 Venture into Covington and soak up sweeping views of downtown Cincinnati with a pint in hand from Braxton Brewing Company’s rooftop bar.

1. The Divine Proportion of All Things

Find this mural at 714 Washington Avenue.

Using repetition of the “Golden Section,” The Divine Proportion of All Things, celebrates land and the interconnected elements of life: water, earth and air, symbolizing how a community depends on each other to live in harmony.

2. An Epic of Time and Town

An Epic of Time and Town tells the story of the people and places of Covington. Look closely and explore historic figures, residents and the city’s most-cherished landmarks.

Appreciate the natural beauty of the neighborhood and historic architecture in Sunset Walk Through Helentown. Painted in trompe l’oiel style, this mural depicts the homes, foliage and pets of the surrounding area. 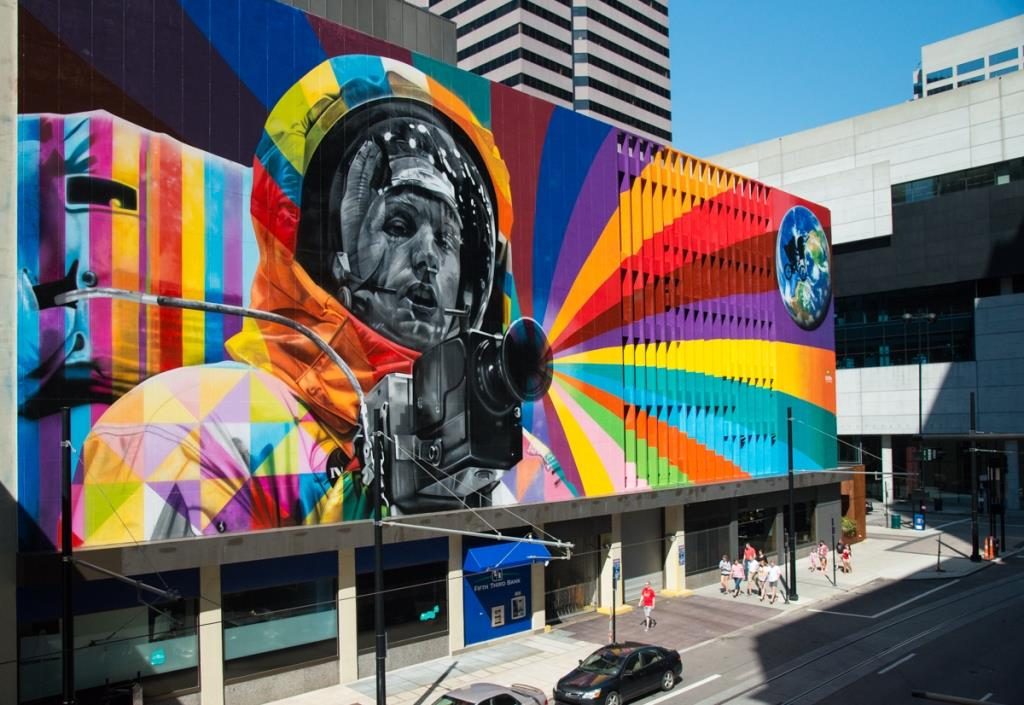 Head back towards the Great American Ballpark, Paul Brown Stadium and Smale Riverfront Park to find impressive views of the city and river at Christian Moerlein Lager House. Come hungry – they have a full menu of beer-friendly eats to choose from.

Inspired by one of Cincinnati’s most treasured painters Frank Duveneck and his most beloved painting, The Cobbler’s Apprentice Plays Ball adds a slight twist with the addition of a baseball bat to pay tribute to the city’s important role in the history of baseball as the first professional American team. The original painting can be seen in the Taft Museum of Art’s permanent collection.

2. We Need Education Not Violence

Serving as a large scale response to the issue of gun violence, We Need Education Not Violence was created with the intention of promoting conversations on how we as a society can move forward peacefully in creating a safer world in which to live.

Find this mural across the street from 21c at 511 Walnut Street.

Head back to where you started and marvel at the vibrant depiction of Ohio-native, Neil Armstrong. The Armstrong mural was created by world renowned Brazilian street artist Eduardo Kobra, who completed this after finishing a mural in Rio for the 2016 Olympics.

Featured mural: Mural: Koverman Mosaics, ‘Bar Maid,’ 2016. Find this mural on the side of Moerlein Beers in OTR