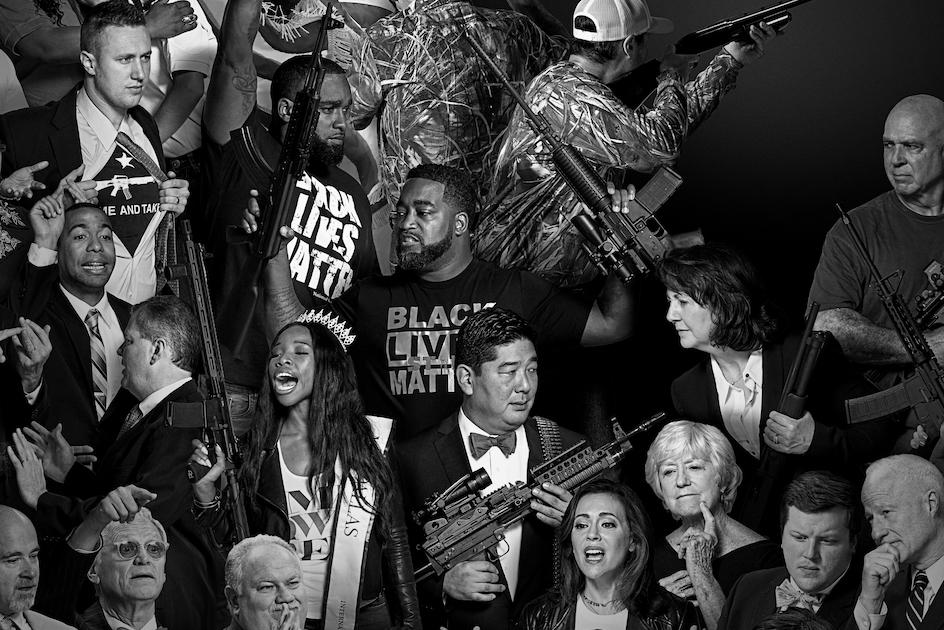 Join us at 21c Bentonville as we host an open discussion about gun ownership in America. Award-winning artist JR and TIME Magazine have created a video mural with interviews from people with wide ranging opinions and experiences with guns, gun violence, and second amendment rights. JR’s video mural will be on view and serve as the starting point for the discussion.  The audio and videos in JR’s mural represent a diverse spectrum of voices and stories within an often volatile and complex issue. This is not a discussion about policy or politics, but an opportunity to listen and share personal experiences and feelings about guns in America, in a safe, honest, and open environment.

> It is 21c Bentonville’s policy that guns are not permitted on the property.

It’s a truly American story: 325 million people, more than 265 million guns, 35,000 deaths a year and one 227-year old constitutional right.  To move beyond the familiar, TIME partnered with JR, an artist and photographer know for documenting social issues.  In three U.S. cities, profoundly affected by guns-Dallas, St. Louis and Washington, D.C.-we invited people to share their views, describe their experiences and search for common ground.  We met hunters and activists, teachers and police officers, parents and children.  JR photographed 245 people to create this mural for TIME’s November 5, 2018 cover.

ABOUT THE LIVE MURAL

JR and his team have created a live mural of each person featured in the project. Individuals were filmed in slow motion, interacting with someone else in the mural, creating a living artwork which vividly depicts the issue.  Each side of the issue is represented by individuals and groups sharing their stories and visual interactions.  On a broader level, the live mural will be projected all around the country and will be made available to the public to use the artwork as a tool for gathering communities and creating meaningful dialogue.

Only through art can all these people, with such opposing views, be brought together.

JR exhibits freely in the streets of the world, catching the attention of people who are not typical museum visitors.  In 2006, he created Portrait of a Generation, portraits of suburban “thugs” that he posted, in huge formats, in the bourgeois districts of Paris.  In 2007, with Marco, he made Face 2 Face, the biggest illegal exhibition ever.  JR posted huge portraits of Israelis and Palestinians face to face in eight Palestinian and Israeli cities.  In 2008, he embarked on a long international trip for Women Are Heroes, in which he underlines the dignity of women who are often the targets of conflicts, and created the Wrinkles of the City.  In 2011 he received the TED Prize, after which he created Inside Out, an international participatory art project that allows people worldwide to get their picture taken and paste it to support an idea and share their experience – as of September 2018, over 350,000 people from more than 140 countries have participated, through mail or gigantic photobooths.

His recent projects include a collaboration with New York City Ballet, an Academy Award Nominated feature documentary co-directed with Nouvelle Vague legend Agnes Varda, a huge installation on the Pantheon in Paris, the pasting of a container ship, the pyramid of the Louvre, a monumental mural “à la Diego Rivera” in the suburbs of Paris, giant scaffolding installations at the 2016 Rio Olympics, an exhibition on the abandoned hospital of Ellis Island or a gigantic installation at the US-Mexico border fence.  As he remains anonymous and doesn’t explain his huge full-frame portraits of people making faces, JR leaves the space empty for an encounter between the subject/protagonist and the passer-by/interpreter.  That is what JR’s work is about, raising questions.

JR has been based in NYC for the past seven years.