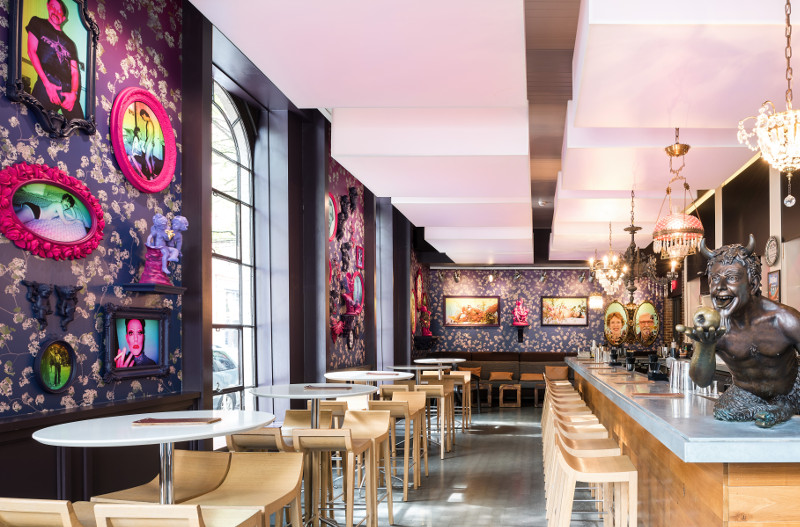 Please complete the form at the link below to register on Zoom for this virtual event.
https://zoom.us/webinar/register/WN_Hz3FnNCfSWu48FpLGItuWw

We invite you to join us for our monthly literary showcase, presented virtually via Zoom for June 2021. 21c Louisville is proud to partner with Spalding’s School of Writing and The Louisville Review to present Voice and Vision. This seasonal forum, held on the third Thursday of each month, May-August, provides an opportunity for writers to share samples of their work with each other and the public. Each month will feature a variety of readings by poets and writers with ties to Kentucky, along with a look at highlights from the current contemporary art exhibitions at 21c Louisville.

In honor of Pride month, we will begin the program with special guests David Burns and Austin Young, artist duo Fallen Fruit, who will speak about the art installation in the Proof on Main Lounge at 21c Louisville, It Happens To Everyone Some Day / The Last ‘Gay’ Bar In America. This installation is about infatuation and the chemistry of attraction, in addition to being an exploration of one of the marginalized communities of Louisville that maintains a strong presence in our community’s archives and present-day social fabric. The title of the work, It Happens To Everyone Some Day, is about “the experience of falling in love and forgetting your ego, the stereotypes you represent, and everything else about yourself because that day is not about you, but is about someone else,” explain the artists. The secondary title, The Last ‘Gay’ Bar In America, is based on the idea that there will be a day when everyone is accepted for who they are and there may no longer be a need for gay bars. The images in the space celebrate important figures from Louisville’s LGBTQ+ history.

Renée Culver is the student services coordinator for Spalding’s School of Writing. She is also an alumna of its MFA program and holds a bachelor’s degree in journalism from the University of Kentucky. She also teaches part-time in the English department at Bellarmine University.

Chicago native M Shelly Conner spent her summers bouncing between her grandmother in Memphis and relatives in Los Angeles, reveling in the sprawl of the Great Migration. She received her Ph.D. from the University of Illinois at Chicago. A multi-genre writer, she is the creator of the Quare Life web series and has published essays on dapperqueer aesthetics, black womanhood, self-sustainable living and their intersections in various publications including: the A.V. Club; the Grio; Playboy Magazine; and Crisis Magazine. Conner is assistant professor of creative writing at the University of Central Arkansas and lives with her wife and their dog Whiskey on their Arkansas homestead.

Ashleé Clark is a writer based in Louisville, Ky. She is the author of the book Louisville Diners (History Press, 2015). Her writing in the book The Louisville Anthology (Belt Publishing, 2020), Salon, the Washington Post, CNET, the Lexington Herald-Leader, WFPL.org, and other publications. She is currently the Vice President of Digital for Louisville Public Media and a host of The Moth StorySlam competition in Louisville.

Carrie Green is the author of Studies of Familiar Birds: Poems (Able Muse Press, 2020). She earned her MFA at McNeese State University in Lake Charles, Louisiana, and has received grants from the Kentucky Foundation for Women, the Kentucky Arts Council, and the Louisiana Division of the Arts. Her poems have appeared in Verse Daily, Beloit Poetry Journal, Poetry Northwest, The Louisville Review, Cave Wall, and many other journals. She lives in Lexington, Kentucky, and works as a librarian in a public library.

Amy Tudor is the author of two full-length collections of poetry, Studies in Extinction and A Book of Birds, along with a number of short stories and essays. She holds both a PhD in Humanities and an MFA in creative writing, and her creative awards and honors include an Al Smith Individual Artist Fellowship, a Virginia Commission for the Arts Individual Artist Grant, the Liam Rector First Book Prize for Poetry, nominations for the Pushcart Prize, and selection as a Notable Essay in Best American Essays 2016. She teaches both creative writing and courses in Thanatology as part of the Department of Health & Aging Services Leadership at Bellarmine University, and she is also a Certified End-of-Life Doula.

Mark Lee Webb received his MFA from Queens University of Charlotte. He has published several chapbooks, and his first full-length book of poetry, It’s Not Easy Being a Moth, is forthcoming from Accents Publishing. His work has appeared in literary journals such as Ninth Letter, The Louisville Review, Reed, Columbia Journal, Aeolian Harp, and many others.

About Fallen Fruit
David Allen Burns and Austin Young, artist duo Fallen Fruit, explore participatory art practice, reflecting upon a broader, controversial global environmental movement involving contemporary art and public spaces. Often using everyday objects as an art making material, they have discovered that using things that are familiar is inextricably bound to identity, and a means for cultural rediscovery, invigorating the politics of both left and right and going far beyond the mundane. Using the public realm as a cultural object to investigate the design of public space and collective experience, Fallen Fruit taps into urban agriculture, a growing global force highlighted recently in London at the Victoria & Albert Museum’s “ FOOD: Bigger Than the Plate,” an exhibition featuring artwork by Fallen Fruit.

Fallen Fruit has been recently featured in15 Los Angeles Artists to Watch, ARTnews (Cover); Artforum (Critic’s Pick);“Tasty and Subversive Too”, The New York Times; Conde Nast Traveler “18 Best Shows in London;” “Food Matters,” TheNew York Times and LA Confidential (Cover and Feature), “How Fallen Fruit is Changing the Art World & Life in LA.” Their work has also been featured in such book publications as The Idea of the West by Doug Aitken, The Omnivore’s Dilemma by Michael Pollan, Come Together: The Rise of Cooperative Art and Design by Francesco Spampinato (Princeton Architectural Press) as well as numerous broadcast radio, TV, video and blog venues.

Born in Los Angeles, California in 1970, David Allen Burns completed an BFA in 1993 from California Institute of the Arts and an MFA from UC Irvine in 2005. David grew up in a diverse middle-class community in West Los Angeles and helped out at family owned businesses across Southern California where he would often explore these diverse communities in surrounding neighborhoods on the weekends. From a young age he was regularly meeting new people of all ages and backgrounds and learning about their stories and livelihoods, participating in community events, and attending cultural programs and services. David’s work has always looked at contextualized relational knowledge and disrupting systems of meaning, especially exploring the limitations and boundaries about what could be considered “familiar.” Often work is created with nonprecious materials, found objects and incorporates materials from the everyday to transform aesthetics and contextual framework that sublimates understanding about what we think we may already know — likened to a conceptual reconstruction of a tromp l’loiel instead of the copy of the visual representation.

Austin Young is from Reno, Nevada and currently lives and works in Los Angeles. The foundation of his career is from studying at Parsons in Paris. Early in his career, Austin transferred his interests from traditional portrait painting towards a long celebrated career in portrait photography. In many ways, Austin is more accurately described as an image-maker: his projects illustrate the sublime qualities of character that make celebrated people unique. Based on a nuanced visual language of pop-culture iconography, his trademark style and techniques have captured a broad palette of musicians, artists and celebrities including Debbie Harry, Leigh Bowery and Margaret Cho, among others. In multiple bodies of work, Austin confuses personality and identity issues in confrontational and unapologetic image making about people who often split gender roles, stereotypical constraints and socially-constructed identities.