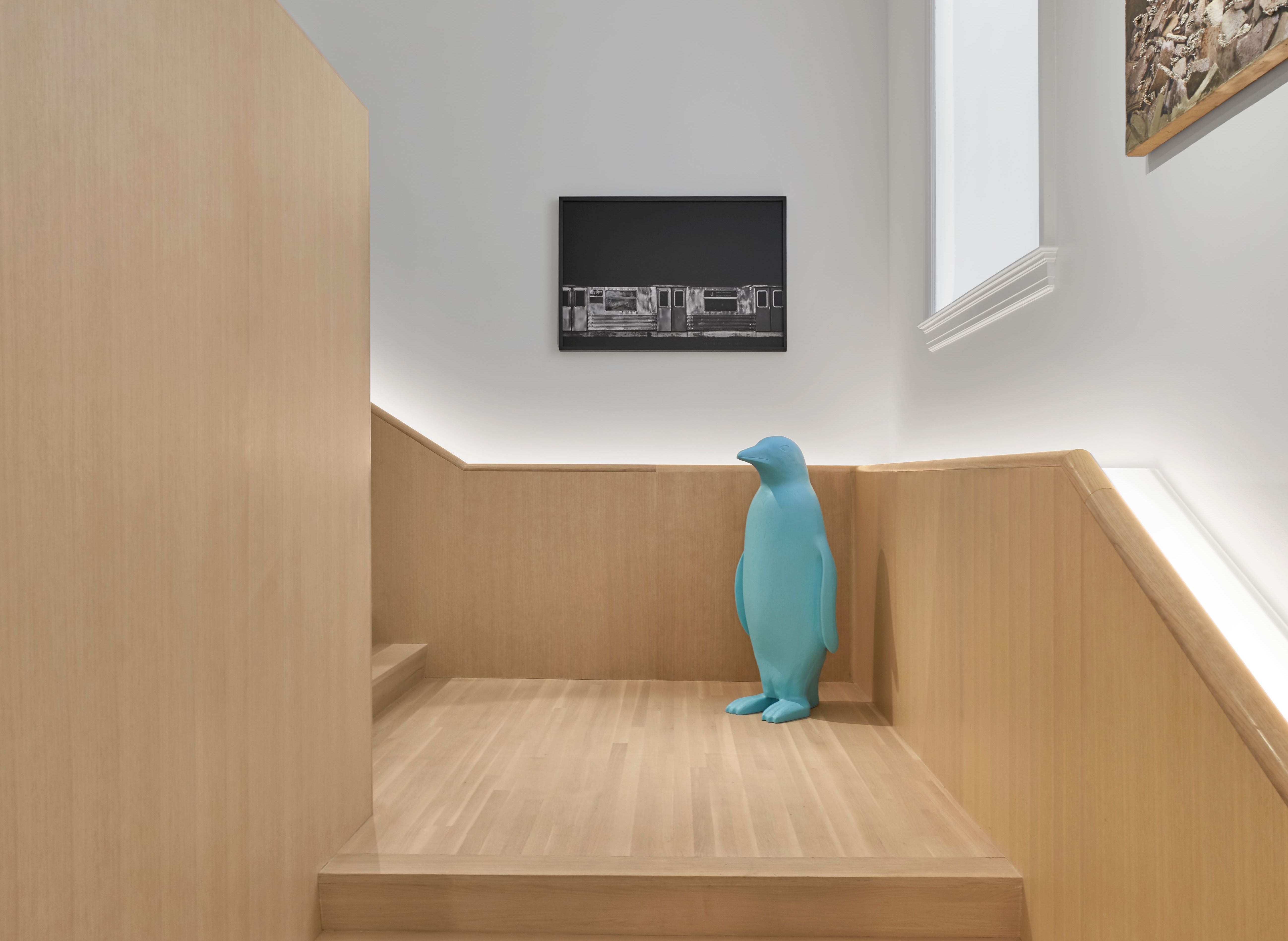 The Sky Blue Penguin celebrates the physical beauty of the expansive landscape of the Midwest, as well as the dreams and desires that inspire fantasy, travel, and innovation. Defined as the color of the sky at high noon, this hue is significant to both science and art, as writer Rebecca Solnit explains in A Field Guide to Getting Lost:

“Light at the blue end of the spectrum does not travel the whole distance from the sun to us. It disperses among the molecules of the air, it scatters in water. Water is colorless, shallow water appears to be the color of whatever lies underneath it, but deep water is full of this scattered light, the purer the water the deeper the blue. The sky is blue for the same reason….This light that does not touch us, does not travel the whole distance, the light that gets lost, gives us the beauty of the world, so much of which is in the color blue.”

Sky blue features prominently in the history of art and in the evolution of domestic architecture. Beginning in the 15thcentury, Renaissance painters like Leonardo da Vinci, used light blue to indicate distance and create perspective, adding depth and dimension to landscapes and portraits. From the 1800s onward, porch ceilings in the United States have often been painted pale blue, recreating open, cloudless skies, transforming spaces into what appear to be both private and public, indoors and out at the same time. A host of theories and folklore have explained this practice, from tricking pesky insects into flying toward the false sky, to protecting houses from evil spirits or bringing good luck, to lengthening daylight hours.

“We have sought the origins of life in the earth’s oldest natural material, that is petroleum. A black, dense liquid disgorging from the warm womb of Mother Earth, and the natural repository of the planet’s entire history of organic life-forms, from its origins to the present day. We have studied the technique known as ‘cracking,’ which breaks up this natural magma into a series of synthetic, artificial derivative products. We have discovered plastic, the most modern and extraordinary element that any artist can manipulate.We use objects and shapes in plastic that evoke or simulate nature, so as to reinstate petroleum’s ancient, primary forms of life and imagery. This means turning life back in its tracks, as a way of finding the poetical voice and soul of art in the material itself.”— Cracking Art

Cracking Art was founded in 1993 by 7 artists: Alex Angi, Kicco, Renzo Nucara, Carlo Rizzeti, Omar Ronda, Marco Veronese and William Sweetlove. They have exhibited widely throughout Europe and first exhibited at 21c Museum Hotel in Louisville in 2006. Louisville’s Red Penguin sculptures that are exhibited throughout 21c were commissioned for a public art project at the 2005 Venice Biennale.

*Manifesto for the Third Millennium

The Philosophical Project of Cracking Art