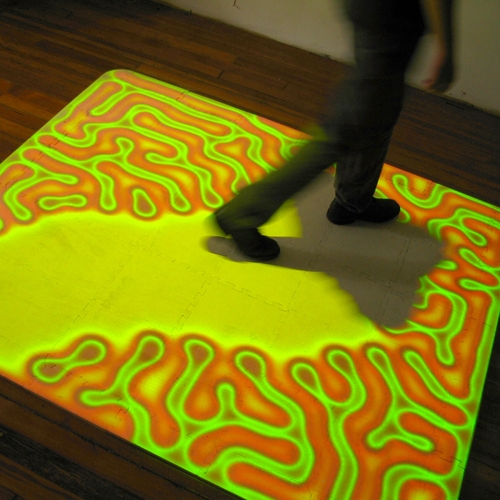 A new media artist working with cutting-edge science and technology, Brian Knep is artist-in-residence at Harvard Medical School, where he works side-by-side with scientists, adapting their tools and techniques to explore alternative meanings and ways of connecting to the world. Knep’s works range from microscopic sculptures for nematode worms to large-scale, interactive, architectural installations. Healing Tiles uses custom software algorithms to create a glowing pool of organic patterns on the lobby hallway floor at 21c Museum Hotel Cincinnati. Left alone, the patterns slowly pulsate and shift over the course of each day; when visitors walk across the piece the patterns tear apart and rebuild themselves, but never exactly as before. The change, explains the artist, “is similar to a scar left behind when a wound heals.” Thus the tiles will hold a history, or memory, of all the interactions that occur in this public space from the time the piece is activated in late 2012.

About the artist
Brian Knep’s work has been shown at the Rhode Island School of Design Museum, the Milwaukee Art Museum, the Denver Art Museum, the New Britain Museum of Art, the McColl Center for Visual Art, the Hudson Valley Center for Contemporary Art, and others. Deep Wounds, a project commissioned by Harvard University, has won awards from Ars Electronica, the International Association of Art Critics, and Americans for the Arts. Knep earned both a  Bachelor’s degree in Mathematics and Computer Science and a Master’s degree in Computer Science from Brown University. Early in his career he was an engineer at Industrial Light & Magic, working on films such as Jurassic Park, Mission Impossible, and Star Trek: Generations. While there, he developed tools including two for which his team was awarded technical Academy Awards.