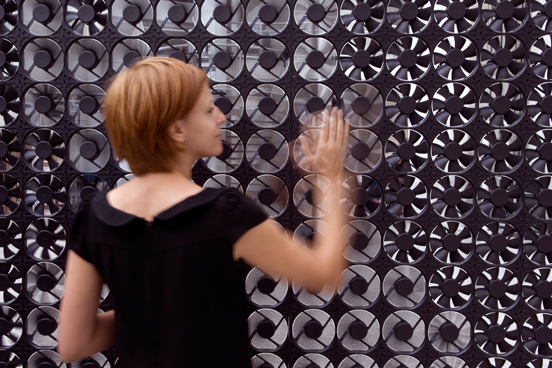 This interactive sculpture by Dutch artist and innovator Daan Roosegaarde is a smart wall composed of hundreds of ventilators that respond to visitors. As viewers approach, sensors located within the sculpture are activated as fans, blowing air onto passersby and into the surrounding space. By walking, speaking, and interacting with its surface, the viewer triggers the emergence of an illusive landscape created out of transparent fields and artificial winds. One of a series such works, this site-specific FLOW 5.0 heightens the visitor’s consciousness—of self, of space, of others, while actually becoming the connection between space and technology. In default mode, FLOW 5.0 creates a series of changing geometric patterns, and, sometimes, a letter may appear: A, E, or R.

About the artist
Artist and innovator Daan Roosegaarde works at the forefront of art and technology, creating social designs that instinctively respond to sound and movement. A graduate of the Berlage Institute in Rotterdam. Roosegaarde’s works of art function as an exploration of the dynamic relationship between architecture, people, and technology.   His sculptures, as well as his large-scale installation and design works, such as Dune and Smart Highway, are tactile high-tech environments in which viewer and space become one. This connection, established between ideology and technology, results in what Roosegaarde calls “techno-poetry”.   Roosegaarde has won the Dutch Design Award, Design for Asia Award and China’s Most Successful Design Award. He has been the focus of exhibitions at the Tate Modern, the National Museum in Tokyo, the Victoria and Albert Museum in London, and has installed public art projects in Rotterdam, Hong Kong. London, Louisville,and numerous other cities and was featured in the Venice Biennale in 2009, and has recently completed commissions for Lille3000, Lille, France (2011-12); Hotelschool Amsterdam (2011-2012); and Shanghai Parks, China (2011).