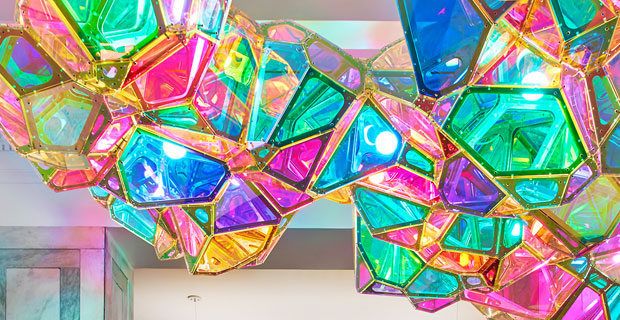 Inspired by the ordered asymmetry of crystals, New York design studio SOFTLab has transformed the entry of the 1914 Fayette National Bank into an immersive installation that looks different from every angle. By cladding the complex aluminum structure with 3M dichroic acrylic, the piece changes color and reflectivity as visitors move around it.  Lit from within by LEDs, the large crystalline structures cast colored light onto the surrounding space, using it as a canvas. The installation acts as both a spectacular form and a giant lantern, creating a landscape of color, an otherworldly atmosphere.

SOFTLab describes the design as “using the principles of both crystal growth and soap bubbles; the piece appears to have grown in the ceiling. 3M dichroic acrylic is used in tandem with this cell-like structure to take advantage of the variation in panel angles. The dichroic film causes interference in light depending on the angle of view, creating planes in a range of color, much like light passing through a crystal. The crystalline interior of the installation takes advantage of this by creating many surfaces of the material at different angles.” This crystalline surface of the dichroic acrylic panels becomes the lens through which visitors can experience kaleidoscopic views of the entry space, each other, and the surrounding urban context of downtown Lexington.

SOFTLab is a design studio based in New York City founded by architect Michael Szivos. The studio has collaborated with various artists, designers, publications and institutions including MoMA, The Metropolitan Museum of Art, The New Museum, The New York Times, eVolo Magazine, Surface Magazine, Columbia University, Pratt Institute, and most recently the Van Alen Institute, which commissioned SOFTLab to create a site-specific installation adjacent to the iconic Flatiron Building in New York City during the 2015-16 holiday season.