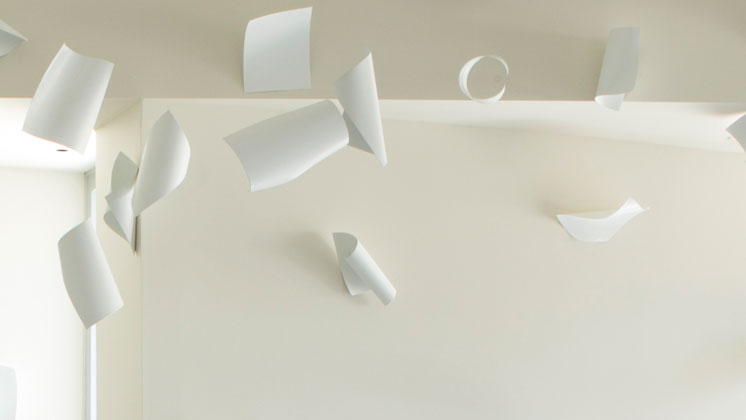 Serkan Özkaya’s A Sudden Gust of Wind, Bentonville is comprised of 400 sheets of metal that emulate a scattered stack of 8.5″ x 11″ papers, frozen in motion across the ceiling and walls and descending to the floor. Alluding to the beauty found in the moments or seconds between action and destruction, control and chaos, A Sudden Gust of Wind, Bentonville is one of a series of related installations referencing older artworks of the same title, including a large-scale, staged photograph by contemporary American artist Jeff Wall and a 19th-century woodcut print by Japanese artist Hokusai, both of which depict figures in a landscape caught off-guard by gusts of wind, their papers and possessions flying out of reach. Özkaya removes the figures and landscape in his three-dimensional metaphor for arrested movement, creating an installation that responds visually and formally to the surrounding light and space.

About the artist
Growing up in Turkey, Özkaya felt geographically isolated from many of the world’s greatest masterpieces; his own works frequently recreate or echo iconic art in an effort to engage with the original work and reinterpret it, thereby questioning conventional notions of authenticity and value, exploring whether an artwork’s significance is determined by the art object or by its mythology. Özkaya’s 30-foot sculpture installed outside of 21c Museum Hotel in Louisville, David (inspired by Michelangelo), is a recreation of the marble Renaissance masterpiece, rendered in fiberglass and gold spray paint. Özkaya currently lives and works in Istanbul and New York. He holds an MFA from Bard College in Red Hook, NY, and a Ph.D. in German Language and Literature from Istanbul University. His work has been featured in solo exhibitions at Galerist, Istanbul (2012); Storefront for Art and Architecture, New York (2012); Galeri Nev, Istanbul (2010); Slag Gallery, New York (2010); 1K Projectspace, Amsterdam (2009); Changa, Istanbul (2008); and Shangay & Freemans, New York (2007). In 2003, Özkaya was a fellow at the MacDowell Colony in New Hampshire, and was artist-in-residence at the École Régionale des Beaux Arts de Nantes (2000–2001), Rooseum in Malmö with the IASPIS grant (2002), Platform Garanti Contemporary Art Center in Istanbul (2003–2004), and at Künstlerhaus Bethanien, Berlin (2006). In 2012, Özkaya installed his public sculpture, David (inspired by Michelangelo), 2005-2011, at 21c Louisville.