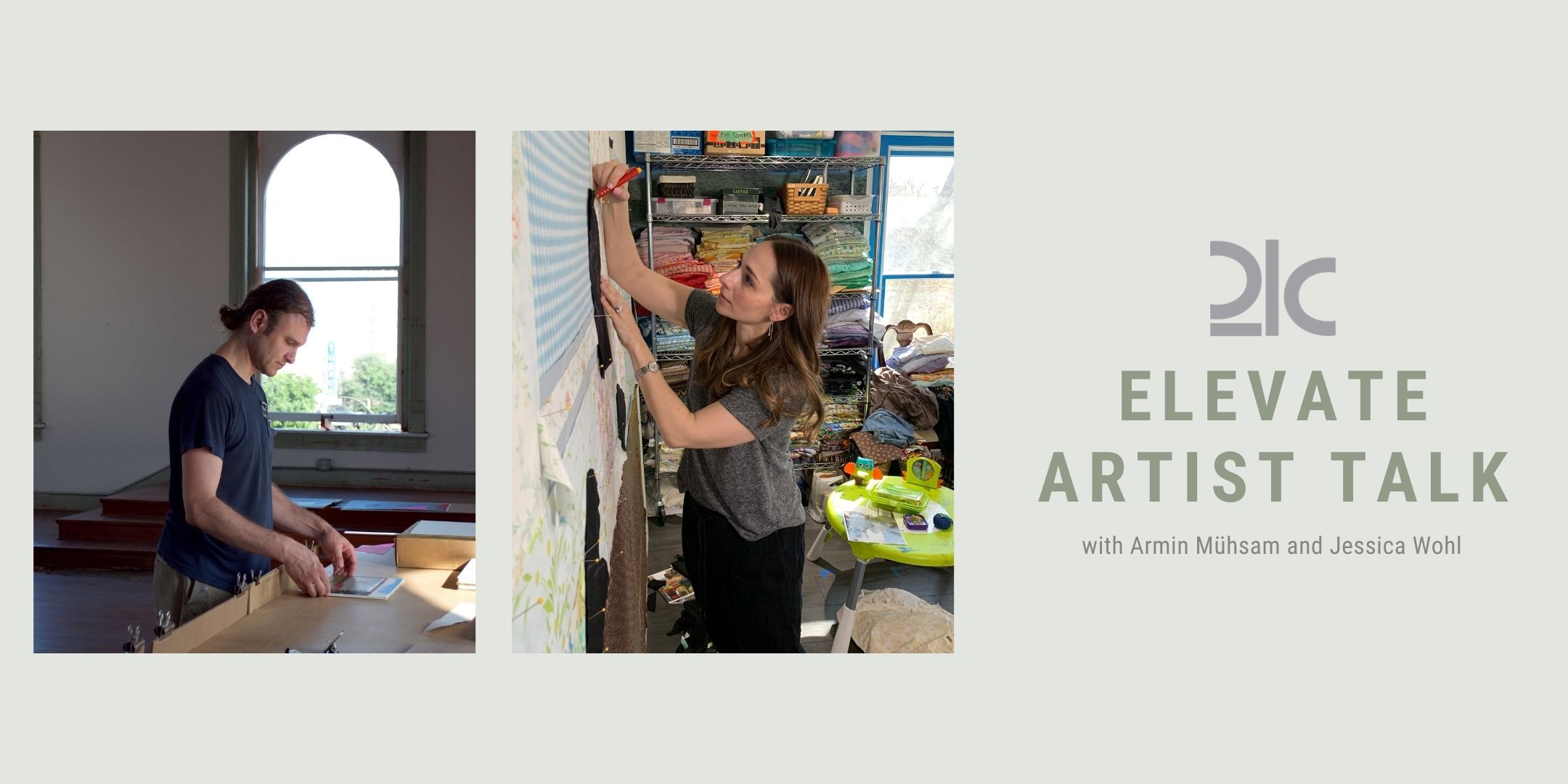 ELEVATE AT 21c PRESENTS WORKS BY REGIONAL ARTISTS FOR GUESTS IN THE HOTEL. JOIN US FOR AN ARTIST TALK WITH ARMIN MÜHSAM AND JESSICA WOHL.

ELEVATE AT 21c PRESENTS TEMPORARY EXHIBITIONS OF WORKS BY ARTISTS LIVING AND WORKING IN THE COMMUNITIES SURROUNDING EACH 21c MUSEUM HOTEL PROPERTY. ELEVATE PROVIDES HOTEL GUESTS WITH UNIQUE ACCESS TO THE WORK OF NOTABLE REGIONAL ARTISTS WHILE FEATURING THEIR WORK IN THE CONTEXT OF 21c’S CONTEMPORARY ART SPACE.

JOIN US FOR AN ARTIST TALK WITH ARMIN MÜHSAM AND JESSICA WOHL FOLLOWED BY A Q&A.

Register for this free event here!

Jessica Wohl is a painter and quilter who uses found remnants of domestic culture to explore social inequities that range from systemic racism to the demands of motherhood. Her series Matriarchs investigates women and their relationship to the home through presenting empowered, feminine creatures ruling their domestic domains. Comprised of body parts and domestic furnishings, such as fingers, afghans, stuffed animals, and butcher knives, the anonymous “women” are presented as strong, powerful, alluring, and threatening guardians ready to jump into action. While often inflicting pain upon themselves, these martyrs sacrifice for, and gain their power from, their homes and families. The hand-cut imagery is culled from how-to craft manuals and magazine publications that portray idealized women, such as Women’s Day, Good Housekeeping, Martha Stewart Living, Vogue, Playboy and Hustler, from the 1960s through today.

Born and raised in Minneapolis, Minnesota she graduated from the Kansas City Art Institute and received her MFA from the University of Georgia. Among other publications, her work has been featured in New American Paintings, Vogue, and ArtNews, and has been widely exhibited nationally and internationally. She has held residencies at the Vermont Studio Center, the Hambidge Center for the Art and participated in An Artist Residency in Motherhood. She is represented by Weinberger Fine Art in Kansas City, and is currently an Associate Professor of Art at the University of the South in Sewanee, Tennessee.

Armin Mühsam compares his current practice to that of an architect who designs forms of his own devising. Unlike actual architects, however, his planning and drafting is not preliminary but rather the final aesthetic accomplishment itself. This relationship between vision and reality in representational painting has always fascinated the artist, and in his most recent paintings, this dynamic has become the content of the work.

Armin was born in Cluj-Napoca, Romania, the Transylvanian city that is called Klausenburg by its German, and Kolozsvár by its Hungarian inhabitants. In 1977, his family moved to what then was still West Germany and settled in Munich. He earned a BFA in Illustration at the University of Applied Sciences, in Munich and an MFA in Painting at Montana State University, Bozeman, Montana. Mühsam has exhibited internationally for more than two decades, and is widely collected and published. He is currently a Professor of Art at Northwest Missouri State University in Maryville, Missouri and represented by Haw Contemporary in Kansas City.