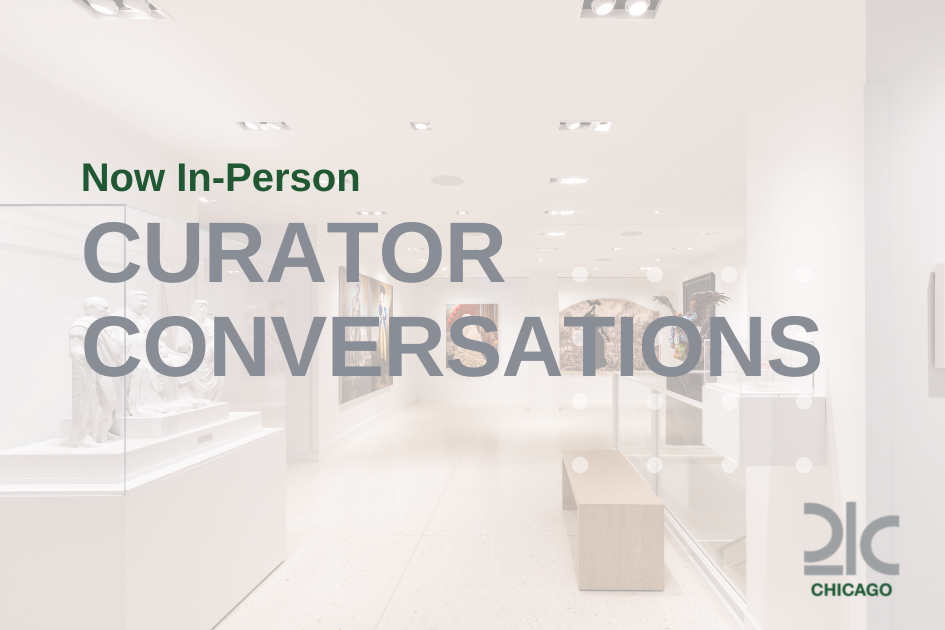 How: Free event, RSVP at our Eventbrite link to get reminders for the event

Curator Conversations is a free monthly series that asks a local art curator to chat with an artist of their choice with ties to the Chicago arts community. Each month we’ll switch up those pairings to give you a look into the rich arts community that we have here in the city.

Guests are welcome to stay after the talk and enjoy our current exhibition, This We Believe.

Emma Mckee isn’t your average cross stitcher. Born in Kansas City, she was first introduced to the medium through her mother, a British opera singer who frequently attempted to teach Emma how to stitch during her childhood. Yet she always refused to learn, finding the British craft too antiquated — that is, until she found a way to make cross stitching work for her.

In 2014, Emma stitched her first piece: An adaptation of Will Prince’s artwork for Chance the Rapper’s song “Hey Ma.” She followed that with a jacket that Chance wore on the cover of Billboard magazine. Her portfolio expanded from there, as she firmly planted herself within Chicago’s rap community, as the scene’s preeminent — and only — hip-hop cross stitcher, earning the name Stitch Gawd.

Since 2014, she’s created countless pieces for musicians and artists both in and outside Chicago. In 2017 she started exploring large scale non traditional cross stitch with an install for Adidas’ Originals windows. She continues to explore large scale cross stitch most recently with a 9 foot portrait of Chairman Fred Hampton- Chairman of the Illinois Chapter of the Black Panther Party.

Adia Sykes is the Museum Manager for 21c Chicago, where she organizes a wide range of arts programming, often in collaboration with other cultural and civic organizations, all open and free to the public. Through her independent curatorial practice, Sykes has realized projects in Chicago and abroad with organizations such as the Art Institute of Chicago, Woman Made Gallery, Hyde Park Jazz Festival, Comfort Station, ACRE Projects, and Centro Opificio Siri in Italy.