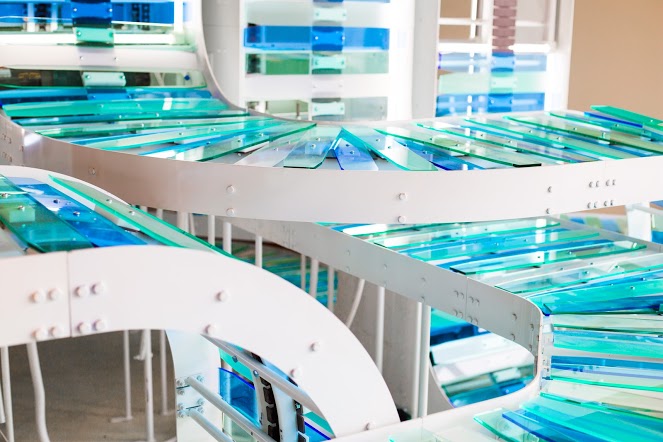 Inspired by the history of assembly-line production, River of Time uses conveyor belts whose top surfaces are replaced with semi-transparent colored sheets of acrylic to create moving panels that flow along the conveyor paths like an animated river. The ‘river’ flows up and over the center of the installation like a waterfall. Behind the waterfall is a large clock that shows the current time through LED lights that shine through the panels of acrylic as they pass in front.

The conveyor belts provide a material link to the building’s history as an assembly plant, while creating a dynamic visual installation that displays the current time. The installation mixes digital technology and mechanical components to create a dynamic sculpture of a flowing river, animating the movement of time and the transformation of the built and natural world, throughout the past, present, and future.

New York-based artist James Clar uses technology as a medium to critique the dis-associative effects of technology itself. In today’s media-saturated and technologically integrated world, the separation between real and computer-generated is increasingly blurred. His work uses controlled, artificial light as a sculptural medium with a computer-minimalist aesthetic. However, his subject matter offsets these data-driven techniques by engaging with natural phenomena, human emotions, or current socio-political conditions.