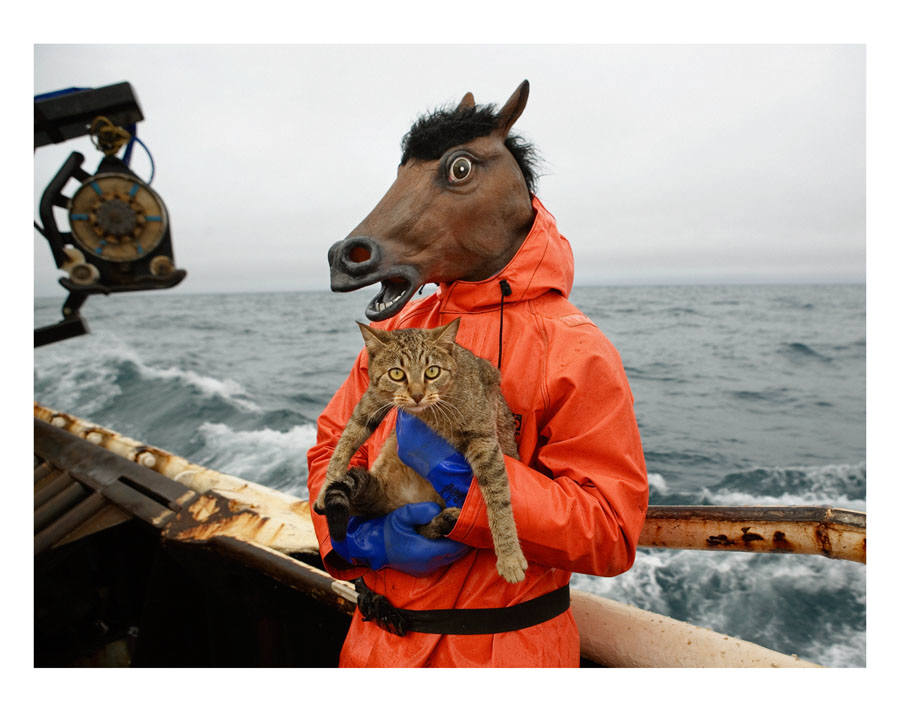 Serkan Ozkaya’s Baker’s Apprentice beckons visitors to Mary Eddy’s. A white-clad, blindfolded figure suspended in mid-fall as she reaches for the eggs escaping her outstretched tray, she embodies a fantasy. “My main idea was the idea of a disaster and the beauty in it,” explains Ozkaya. “If only she wouldn’t fall actually and stay in that moment, between her routine life and the disaster. That’s where the sublime lies somehow.”

Referencing both personal experience and the Surrealist language of dreams, Amelia Biewald, Blakely Dadson, Johnston Foster, and Corey Arnold utilize animal forms to explore intersections between nature and culture. Blurring the boundaries between organic and artificial, allure and revulsion, Amelia Biewald’s works often merge centuries-old systems of scientific study with the clutter of modern excess. Using salvaged decorative hardware, Biewald bejewels a taxidermy deer head to create Ton Ton, transforming a hunter’s trophy into a hybrid vision of old-world beauty. Topped by two small electric candles, the sculpture pulses with artificial life, and appears both human and animal. “I have a Romantic urge to search for supernatural beauty in the natural world,” says the artist. “What is of interest to me are the inherent visual possibilities of that super-naturalness.”

Blakely Dadson’s monumental portraits of hybrids mix memory with mythology: two soldiers stand back to back in Immobile, their heads intertwined in a cornucopia design inspired by a 19th-century doorway near the artist’s boyhood home in Brooklyn. “There were Rasta flags everywhere,” recalls the artist, “and I was struck by the beauty of the brownstones with their ornate stonework and architectural flourishes.” Dadson includes a Rasta flag in homage to the Rastafarian credo of nonviolence, a theme he also invokes in Nice, Nice…, in which former Ethiopian ruler Haile Selassie is depicted as having subdued, but not slayed, an enormous octopus. Selassie was reputed to be both brutal and beloved; Dadson imagines him representing civilization, and his sea-creature opponent symbolizing nature. In Dadson’s fantasy, “Man and the natural world have come to an understanding.”

Johnston Foster’s Head Stash presents a bust of a tiger, severed from its body, made with strips of orange safety cones and other found, everyday materials. Canvasing highway medians, dumpsters, and urban alleyways, Foster crafts his sculptures from discarded, cast-off objects. “I use materials that are easily manipulated, like plastics,” says the artist. “I have access to more synthetic materials; it’s as if my environment is providing for me.” Transformation is both Foster’s practice and the subject of his artworks, which explore the conflict of adaptation—of animals and humans, to rapidly changing environments and to each other. Here, the tiger has lost his struggle to survive; the wasp, while far smaller, appears the hardier species, able to escape the tiger’s predator.

Survival is threatened in Corey Arnold’s surreal photographs of the turbulent, icy waters of the Bering Sea. A commercial fisherman by trade, Arnold documents his experiences aboard ship in his ongoing series, Fish-Work, depicting what he describes as “the simultaneous bravery, toil, humor and gumption that ‘fish-work’ demands” in images that evoke both a dream world and lived reality. The simultaneous documentation of fantasy and experience also inspired a series of self-portraits by Sam Taylor-Johnson. After surviving cancer, the artist fulfilled a dream of weightless suspension: harnessed in a range of different positions, she photographed herself in her studio, later digitally erasing any evidence of straps or pulleys. Gracefully floating in midair, she is unbound by gravity or disease, free of any constraints.

The media are the messages in portraits by both Vik Muniz and Chuck Close. Vik Muniz’s Marlene Dietrich (from Pictures of Diamonds) creates a literal projection of the desire for the wealth and glamour associated with the 20th-century actress, while acknowledging the ephemerality of fame and fortune: the Brazilian artist literally spilled, then arranged, loose diamonds in the shape of the actress’s projected, archival press photograph, only to sweep them up again after creating the image. In Kara, Chuck Close combines two aspects of artist Kara Walker’s identity: her physical image and her chosen creative methodology. Walker is best known for her use of the silhouette in searing resurrections of popular historical American illustrations and imagery. In Kara, she appears as a classical icon in a traditional 19th century photographic medium, the Daguerreotype, created in homage to an artistic practice bound up with histories of individual and social identity formation, manipulation, and subjugation—the prevailing themes in Walker’s art. Close’s own celebrated practice as a contemporary, multi-media portraitist demonstrates the continuing evolution of the genre, and helps him remember friends and colleagues: Close suffers from prosopagnosia, a condition that renders him unable to recognize or recall faces. The golden halo of light enveloping Walker’s profile reveals Close’s deep admiration for the younger artist and her illuminating investigations of American history.