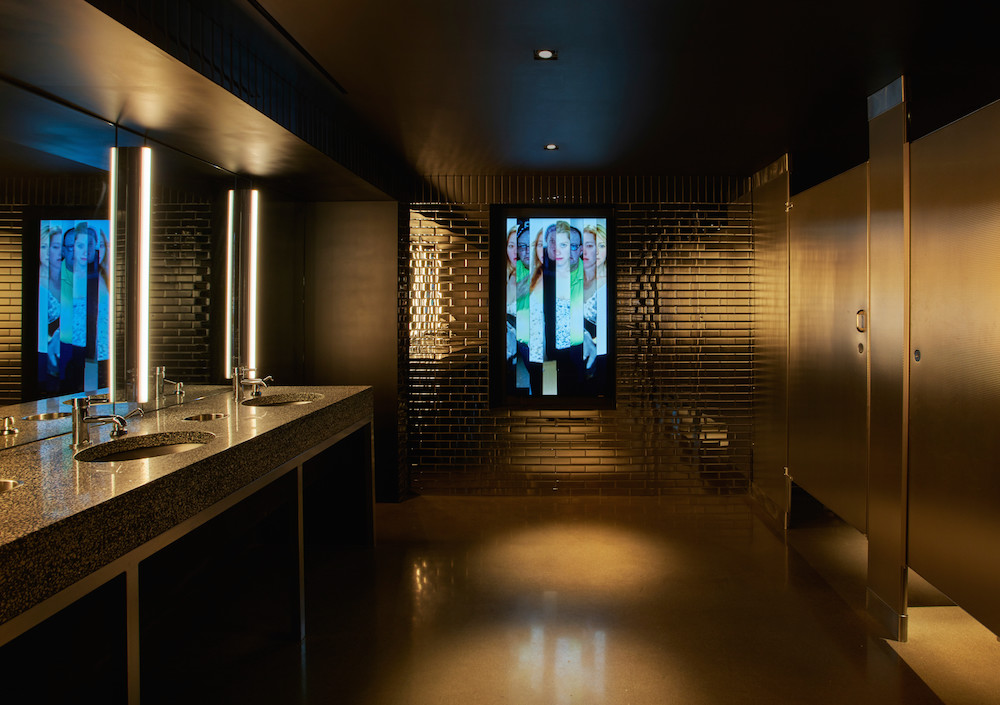 In a central screen located at the end of the corridor that leads to the restrooms, a biometric tracking system finds the axis of symmetry of visitors using face detection. When the axis is found to be in an almost vertical orientation the computer splits the live camera image into two slices. With each new participant time slices are recorded and pushed aside. When no one is viewing the work, the slices close and rejoin creating a procession of past recordings. The piece is inspired by time-lapse sculptures and masks that can be found in ancient traditions (Aztec three-faced masks, the avatars of Vishnu) and modern and contemporary art from Europe, Asia, and the Americas (Duchamp, Balla, Minujín, Schatz, Kanemaki). As in the Aztec three-faced mask, the central strip corresponds to the younger, most recent portrait, whereas the farthest one to the sides represents the oldest portrait.

Once inside the restroom, another screen shows the time slices recorded from recent participants shuffled and remixed, so that a wide variety of pairings are shown, creating hybrid bilateral portraits of people who have participated.

A single-screen version, Bilateral Time Slicer, was introduced at Untitled Art Fair in Miami in December 2016:

Rafael Lozano-Hemmer is an electronic artist who develops interactive installations that are at the intersection of architecture and performance art. His main interest is in creating platforms for public participation, by perverting technologies such as robotics, computerized surveillance or telematic networks. Inspired by phantasmagoria, carnival, and animatronics, his light and shadow works are “antimonuments for alien agency”.

His large-scale interactive installations have been commissioned for events such as the Millennium Celebrations in Mexico City (1999), the Cultural Capital of Europe in Rotterdam (2001), the UN World Summit of Cities in Lyon (2003), the opening of the YCAM Center in Japan (2003), the Expansion of the European Union in Dublin (2004), the memorial for the Tlatelolco Student Massacre in Mexico City (2008), the Winter Olympics in Vancouver (2010), and the pre-opening exhibition of the Guggenheim in Abu Dhabi (2015).

Recently the subject of solo exhibitions at the San Francisco Museum of Modern Art, the MUAC Museum in Mexico City, and the Museum of Contemporary Art in Sydney, he was the first artist to officially represent Mexico at the Venice Biennale with a solo exhibition at Palazzo Soranzo Van Axel in 2007. He has also shown at Art Biennials and Triennials in Havana, Istanbul, Kochi, Liverpool, Montréal, Moscow, New Orleans, Seville, Seoul, Shanghai, Singapore and Sydney. Collections holding his work include the MoMA in New York, Tate in London, AGO in Toronto, CIFO in Miami, Jumex in Mexico City, DAROS in Zurich, Borusan Contemporary in Istanbul, MUAC in Mexico City, 21st Century Museum of Art in Kanazawa, MAG in Manchester, MUSAC in Leon, MONA in Hobart, ZKM in Karlsruhe, MAC in Montréal and SAM in Singapore, among others.